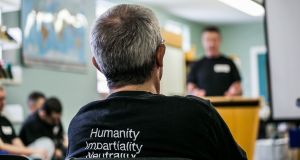 Irish Red Cross volunteer inmates at the Community Based Health in Detention Workshop at the Midlands Prison in Portlaoise. Photograph: James Forde

A pioneering health programme in Irish prisons has been credited with reducing knife attacks, improving the mental health of inmates and increasing their uptake of potentially life-saving health screening.

Including a variety of initiatives from disease screening to overdose protection, correct hand-washing techniques to litter campaigns, the programme, run by the Irish Red Cross, is seen as a model internationally for peer-to-peer education among prisoners.

Representatives from Red Cross societies from as far away as Australia travelled to Portlaoise this week to learn from the Irish experience, with a view to implementing similar programmes in their own countries.

More than 1,000 inmates have passed through the Community Based Health and First Aid programme, in all 14 Irish prisons, since it started a decade ago.

“The programme has become an exemplar of good practice for engagement with prisoners,” says Caron McCaffrey, director of the Irish Prison Service.

The principles of adult education are “writ large” in the programme, according to Stephen O’Connor of the City of Dublin Education and Training Board. “Adults need to be involved in the planning of their training and they want subjects of immediate relevance. They want to solve problems, rather than look at facts.”

A reduction in weapon attacks at Wheatfield Prison is cited as one of the programme’s successes. At the time, the prison was experiencing a wave of knife crime.

“People were living in fear. You’d get cut for nothing; an argument over something silly. You’d be walking down a landing on trails of blood,” says Francis, one of the volunteers who took part in an initiative to de-weaponise conflict in the jail.

Prison management and volunteers arranged a one-week amnesty during which weapons could be handed in without penalty.

“We asked who wanted to come out of prison with a nasty scar on their face, one they’d have for the rest of their lives,” says Francis, speaking at the Midlands Prison in Portlaoise.

The result was a fall in the proportion of attacks involving weapons, from 97 per cent of all attacks to just 6 per cent in a few months.

Another successful initiative saw 76 per cent of targeted prisoners voluntarily present for Hepatitis C testing in 2017. The disease can be cured in most patients, thanks to revolutionary new treatments.

Fellow prisoner Jim talks of the “myths” that had to be overcome, such as a claim blood samples taken during screening would be put on a DNA database.

“Prisoners don’t take to authority. Coming from peer to peer, though, they will listen. We come from the same environment, we sleep under the same roof, they’ll listen more to us,” he says.

“At the start it was seen by the other lads as a bit of a joke, but we persevered,” says Declan, who was involved while in Cloverhill Prison in a campaign to raise awareness of Spice, a so-called “zombie” drug linked to a surge in prisoner deaths.

The governor, anxious to avoid overdoses, called in the Red Cross volunteers. “This had hit the place like a whirlwind. No one knew what it was and people were dropping like flies,” Declan recalls.

“We told people to think of the most important people in their lives and to imagine them getting the call from the governor saying they had died of an overdose. It was coming up to Christmas; we got them to imagine how that Christmas would be ruined, how the presents would be packed away, how Christmases for years to come would be ruined.”

No prisoners died that Christmas, and the team moved on to tackling broader myths about overdoses; such as that you can sleep them off, for example.

Midlands Prison is a noisy, monochrome environment. Shaved heads, pumped-up biceps and tattoos are the norm. Signs tell inmates there is “no spitting, no littering, no graffiti” allowed, though large amounts of rubbish lie in the grass outside.

A circular crossing area lies at the heart of the building; from here prison officers can observe what is happening in each of the four wings on two levels. The bars on the wings have been bevelled and flattened to prevent prisoners seeing what is happening outside their area.

The prison was built to house about 870 prisoners, whose terms range hugely from one week to life.

“Like the tide, it comes and goes, but it never stops,” he adds, as large groups of young men, part of Monday’s complement of 830 prisoners, move along the landings above on their way to activities between meal times.

For many of the volunteers, involvement in the Red Cross programme has sent them on a journey of self-discovery. “I came into prison as a kid. I grew up here,” says one prisoner, currently nearing the end of a 15-year sentence. “For the first five years, I was involved in nothing but negativity – drugs, phones and so on. You have to look hard to survive and I played up to that.

“Education got me off drugs. And then I started finishing courses, and all the positive things that go with that.”

Today, he has a degree and trains volunteers in the Red Cross principles. He talks eloquently about the “ripple effect” of his work as it interacts with men’s sheds, third-level institutions and groups working with young offenders in the North.