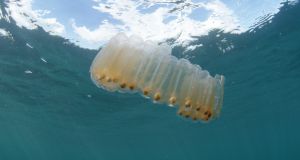 A salp which is a jellyfish-like species known as zooplankton that brings carbon dioxide to the ocean floor where it is stored. Photograph: Ken O’Sullivan/Sea Fever Productions

Microscopic pieces of plastic consumed by plankton in the world’s oceans could be affecting the marine organisms’ ability to capture carbon dioxide, Irish scientists have warned.

Oceans have stored up to half of all CO2 produced by mankind in the last two centuries. And it is held at the bottom of the sea, according to marine scientists from the Ryan Institute at NUI Galway.

On the sea surface, microscopic algae turn dissolved CO2 into fuel known as organic carbon and these algae are consumed by many different animals, forming the basis of the marine food web.

Passing through the food chain, much of the organic carbon is released and converted back into CO2. Some of it is released into the ocean and the atmosphere. And more of it is transported to the sea floor by salps, jellyfish-like animals known as zooplankton which bring it to the bottom where it is stored.

However, microscopic pieces of waste plastics are interfering with the chain, according to the NUIG research carried out together with scientists at UCC and Villefranche sur Mer Laboratory in France.

“(Salps) ingest algae at the sea surface and produce dense faecal pellets, which rapidly sink to the deep sea, carrying with them some of this captured carbon,” explained Alina Wieczorek of NUIG.

Experiments in Villefranche found that when salps ingest microplastics and incorporate them into their faecal pellets they did not sink as fast, according to research published in the journal Environmental Science and Technology.

“Our study suggests salp faecal pellets will remain at the sea surface for longer when they contain microplastics and while there, they may get broken down causing the CO2 to be re-released back into the ocean and atmosphere,” said Ms Wieczorek.

This means microplastics have the potential to lower the efficiency of one of the most important natural processes occurring within our oceans – “the biologically-driven transport of CO2 to the seafloor”.

Dr Tom Doyle of UCC said the laboratory work highlights marine litter and microplastics may affect animals and even ecosystems in ways not yet considered.

“However, it is very important to point out our study was carried out in a laboratory . . . We now need to go out into the field to further test our hypothesis by quantifying the abundance of microplastics found in salps and their faecal pellets in different areas of our oceans.”

Carbon dioxide is the biggest cause of global warming. It is released when fossil fuels are burned and atmospheric levels have continually risen over recent centuries, contributing to climate change.

While alterations in the density of salp faecal pellets may cause some of them to be recycled in upper waters, some may still reach the sea floor and transport the microplastics within them to the deep sea. Evidence to support this theory was confirmed in the Mariana Trench, the deepest point on Earth located in the Pacific Ocean.