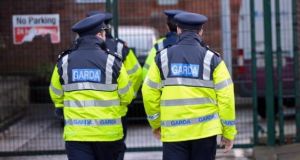 Move is part of an overhaul of the Garda approach to human rights which will also see it conduct urgent reviews of its policies regarding high speed chases and the use of firearms. Photograph: Eric Luke/The Irish Times.

The Garda is to select “champions” among its ranks who will be responsible for generating conversations about human rights within the force and encouraging members to attend training in the area.

The move is part of an overhaul of the Garda approach to human rights which will also see it conduct urgent reviews of its policies regarding high speed chases and the use of firearms.

The Garda Human Rights Strategy 2020-2022 outlines a wide range of reforms recommended by the Commission of the Future of Policing including the establishment of a Strategic Human Rights Advisory Committee (SHRAC) chaired by Garda Commissioner Drew Harris.

The committee will also include members of outside bodies including Amnesty International, the Director of Public Prosecutions, the Law Society and the Irish Human Rights and Equality Commission.

As part of its strategy the Garda will “urgently” review five “priority” areas where policing interacts with human rights. These are the use of force (including firearms), chases involving Garda vehicles, the Garda victims of crime policy, the detention of suspects in Garda custody and public order policing.

Garda “human rights champions” will be trained to instigate conversations with other gardaí about human rights issues “whenever relevant” and to encourage colleagues to attend the available training courses in the area.

Champions will receive “bespoke” human rights training and will form part of a network which will be asked to develop ideas on increasing the visibility of human rights in police work.

Champions will also engage with community organisations and individuals to allow them provide feedback to the Garda on its human rights approach.

All Garda personnel are to be trained in “a human rights based approach” through a variety of courses. This will apply to student and qualified gardaí of all ranks.

Other initiatives include “debriefings” following major operations on how well the human rights of those involved were protected.

A senior garda will also be assigned to provide “human rights support” to operational commanders at major events or at serious crime scenes.

The Garda will introduce a formal procedure for identifying criticisms from judges and politicians on human rights and to take action to resolve legitimate complaints “if necessary”. Mechanisms will also be introduced to record human rights developments from Irish and European courts, the strategy states.