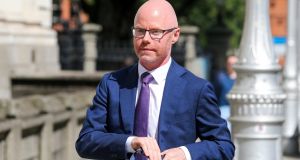 Minister for Health Stephen Donnelly has said primary legislation will be required for greater Garda enforcement powers to ensure the latest Covid-19 restrictions are adhered to.

Mr Donnelly said the Government will be looking for cooperation “across the political spectrum” to ensure the legislation is enacted.

“The timing of that hasn’t been worked out but the message we’re sending out is this – while the vast majority of people are complying, which is why we’re still mid-table in Europe and not in a worse situation, we can’t have a situation where a small number of people essentially thumb their nose at everybody else,” he told RTÉ’s Primetime on Tuesday night.

“As quickly as we can we’re going to bring in enforcement powers and that does require primary legislation.”

The Dáil is due to return on September 15th while the latest restrictions are in place until September 13th.

Taoiseach Micheál Martin said the Government would draft new legislation to give gardaí the power to close down and sanction any premises that was clearly flouting public health guidelines.

A number of Garda sources said if gardaí had the power to close pubs down on the spot for breaching measures aimed at combating Covid19 it would act as a significant deterrent. They also believed on the spot fines should be introduced.

“It would mean (gardaí) would have the power to enforce all kinds of Covid-19 measures. You could break up gatherings and sanction people at the same time and without having to start a criminal process,” said one source.

However, several sources said introducing new measures to break up house parties was very complex as it would involve entering a person’s home without a warrant.

The Irish Council for Civil Liberties (ICCL) said it does not support the reintroduction of expanded powers of enforcement for An Garda Síochána or the use of criminal penalties.

“We reiterate our position that public health advice should be consent and education-based. It should not be policed by coercion,” it said.

“We call on Government to communicate with and educate people on the appropriate response to the surge in cases, rather than using coercion and force. The increase in new cases of Covid-19 over the past number of days is significant and we must all take the necessary steps to limit the spread of the virus. It is however unfortunate that the latest guidance will disproportionately affect elderly and immuno-compromised people without addressing the issue of congregated settings where the virus can spread.”

The ICCL said there should be more transparency around how public health advice is given and how Government decisions are made.

“The last months have shown that Government must prioritise at-risk people in care homes and nursing homes. It must also take steps to protect people living or working in crowded settings such as Direct Provision centres, factories and halting sites. ICCL believes resources would be better directed in this direction, not in policing ordinary people,” it added.