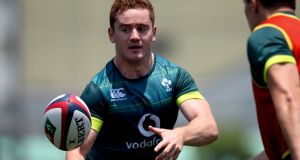 Senior judges in Belfast have lifted reporting restrictions which had prevented Ireland international Paddy Jackson and his clubmate Stuart Olding being named.

Both players were arrested, interviewed and released from custody in June last year. Mr Jackson (25) and Mr Olding (24) strenuously deny any wrongdoing and have not been charged with any offence.

Lawyers for the two have stressed their complete co-operation with the PSNI investigation.

Writs seeking damages for misuse of private information were issued against the BBC after details of the players’ questioning were published online at the start of last November. Their legal teams contend they were not given sufficient notice for a right of reply before the story appeared. They claim it was a private matter and raises issues about how the information was obtained.

With no date set for the hearing of the civil action, the players also sought an injunction to stop further press reporting of the case.

A High Court judge refused their application earlier this year, citing the widespread coverage by other media outlets following the initial article. However, she imposed tight reporting restrictions to stop either man being identified in the litigation.

Her anonymity order was aimed at ensuring no risk of prejudice to the ongoing police investigation.

Appealing that decision, the BBC argued it had been a disproportionate step. Counsel for the broadcaster emphasised both the public interest in reporting the case and the principle of open justice.

Following confirmation that the players were no longer seeking to maintain anonymity, the Court of Appeal has ruled that the restrictions should be lifted.

Lord Chief Justice Sir Declan Morgan said: “In our view there’s nothing to indicate there was a substantial barrier which ought to have interfered with the right of the press to publish the judgment that was given. We are satisfied that we should allow the appeal in relation to that matter and discharge the orders made.”