Almost a third of those under 25 are on lowest Covid payment rate, National Youth Council of Ireland says 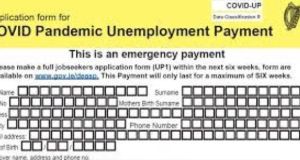 The Government must restore young people to the higher pandemic unemployment payment (PUP) rate or deliver a “massive” jobs support package for them in the budget, the National Youth Council of Ireland (NYCI) has said.

The measures are needed to address the 36.5 per cent youth unemployment rate, it said.

Almost a third of young people under 25 are now on the lowest rate of the PUP (€203) compared to a fifth of recipients over 25, according to analysis undertaken by the NYCI of data provided by the Department of Employment Affairs and Social Protection.

James Doorley, deputy director of the NYCI, said it is calling on the Government to either “restore all those who lost their job as a result of the pandemic to the highest rates or alternatively deliver a massive injection of funds in education, training and access to apprenticeships in Budget 2021 to counteract the impact of the pandemic on the employment and future career prospects of young people”.

“With 36.5 per cent youth unemployment, young people comprising 21 per cent of those on the PUP, a further 28,777 young people on the live register, the pandemic has hit the employment prospects of young people hard,” he said.

Mr Doorley said young people are facing into a “grim period” in terms of employment with “the traditional option of emigration now also largely closed off”.

“It is vital that we provide the young people who lost their jobs in March – and who are unlikely to return to those old positions – opportunities and supports to enhance their skills, retrain and look at new and alternative career options,” he added.

“We cannot afford to abandon them to the corrosive social virus of long-term unemployment.”