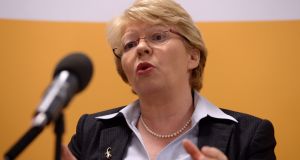 In the Supreme Court judgment, Ms Justice Elizabeth Dunne said, while she accepted there was now a ‘wide diversity’ of family structures, she could not agree with the High Court’s interpretation of the legislation. Photograph: Frank Miller

The Supreme Court has granted the State’s bid to overturn an important finding that the word “child” in the International Protection Act can extend beyond biological and adopted children for family reunification purposes.

The definition of “child”, as used in the relevant provision of the 2015 Act (section 56.9.d) “can only be a reference to a biological/adoptive child of the sponsor”, the court ruled on Tuesday.

That is “the literal and ordinary meaning of the word”, Ms Justice Elizabeth Dunne said, when giving the five-judge court’s judgment.

This was reinforced by the legislative history of the 2015 Act which, unlike earlier legislation, excluded grandparents, wards or guardians, from the definition of “member of the family”, she said.

On the face of it, the provisions of the 2015 Act were “clearly more restrictive” than its legislative predecessors, she added.

The State had appealed a High Court finding in the case of an African man, Mr X, who came here in 2006. After getting protection in 2014, he sought family reunification in early 2015 with two children, then aged 15 and 12, whom he claims are his.

He described himself as single and produced birth certificates for the children naming him as their father and a judgment from a court in his native country appointing him as their sole legal guardian. He initially agreed to the Minister for Justice’s request to undergo a DNA test but changed his mind in 2016, saying he suspected his “wife” was unfaithful and he was afraid to discover he might not be the children’s biological father.

After twice being refused reunification, he took proceedings and the High Court found in his favour. Mr Justice Max Barrett said section 56.9 provides reunification may be sought regarding “a member of the family of the sponsor”, and that member includes “a child” of the sponsor, aged under 18 and unmarried at the date of application.

Assuming the two children are the biological children of another man, although Mr X regards them as his, each of them can properly be described as a child of Mr X for the purposes of section 56.9, he held. There is a “wide diversity” of familial structures and the relationship of father-child is not confined by the 2015 Act to a biological father, he added.

The State appealed and the United Nations High Commissioner for Refugees was involved in the appeal as assistant to the court on legal issues. It argued family unity was an “essential” right of refugees, an essential element in enabling them resume a normal life and facilitates refugee integration in their host State.

In the Supreme Court judgment, Ms Justice Dunne said, while she accepted there was now a “wide diversity” of family structures, she could not agree with the High Court when it said the relationship of father-child was not confined to a biological father in the context of this legislation.

The definition of “child”, as used in section 56.9.d, “can only be a reference to a biological/adoptive child of the sponsor” and this was reinforced by the fact that, rather than introducing a broader meaning of the word “child” in section 56, the overall effect was “restrictive in terms of those to whom family reunification could apply”.

This was also a case in which a “serious doubt” arose as to the paternity of the two children in respect of whom Mr X sought family reunification.

That serious doubt was created by Mr X himself in correspondence with the Irish Naturalisation and Immigration Service (INIS) and, in those circumstances, it was appropriate to seek DNA testing to establish the relationship between Mr X and the two children.

As he refused to undergo such testing, the Minister was entitled to draw an inference from that fact and to refuse the application, she said.

DNA testing, she stressed, should arise only in the limited circumstances where serious doubt has been raised as to the issue of paternity. There is no doubt DNA testing has implications for the right to privacy and, as such, care should be taken before seeking that an individual undergo DNA testing to establish paternity, she said.

It would be inappropriate if the Minister were to do so as a matter of course and resorting to DNA testing should be limited to cases of “serious doubt”.

Mr X could not rely on 2013 regulations which had provided for a wider definition of family member, she further ruled. Those regulations have been repealed and Mr X had no entitlement to rely on them by way of vested right or otherwise, she held.