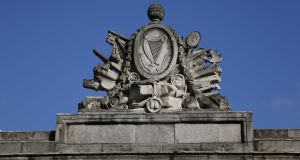 The Minister for Justice has won his Supreme Court appeal over a ruling in favour of a man’s bid to stay here on foot of his relationship with an EU citizen.

The five-judge court stressed its judgment rested on legal findings, not on any factual finding by it that the man, a third country national, is not in a “durable” relationship with a Spanish citizen who lives and works here. The couple have been cohabiting for some four years and there was no evidence their relationship is one of convenience, Ms Justice Marie Baker observed in the judgment on Tuesday.

It remains open to them to regularise their position by making a fresh application, she added.

The Minister’s appeal, against a June 2019 High Court decision, centred on interpretation of the 2004 directive on the free movement rights of EU citizens and their family members as transposed into Irish law by regulations introduced in 2015. It was primarily concerned with how the Minister is to approach an application by a third-country national to be treated as a “permitted family member” on the basis of being in a “durable” relationship with an EU citizen.

Ms Justice Baker found the High Court incorrectly concluded the 2004 directive had not been properly incorporated into Irish law and that the test applied by the Minister concerning “durable” relationship with an EU citizen was “vague and uncertain”.

The High Court also erred in finding a decision-maker in the Department of Justice fettered her discretion when concluding the man had not provided sufficient evidence his relationship was “durable” within the meaning of the directive and regulations, she held. She overturned a High Court finding the Irish transposing instrument does not allow for an effective remedy.

A full internal review is available and that review decision in turn can be judicially reviewed, she said.

The man claims to be in a committed relationship with a Spanish citizen who has lived and worked in here for a number of years. He applied in October 2017 to be permitted reside here but the Minister refused, saying the man had failed to demonstrate he and the woman were in a durable relationship. The refusal was upheld by an internal review.

The High Court found the “general” nature of the language in the regulations and an absence of guidance in interpreting the concept of “durable relationship duly attested” set out in the directive and the regulations, meant the domestic provisions are unclear.

Ms Justice Baker said the appeal concerned the category of family members in article 3 of the directive who are more remote from the EU citizen and whose application for entry and residence in the host member state is to be “facilitated” but who cannot be said to have a right of entry or to remain. Article 3 provides a host member state shall facilitate entry and residence for persons including “the partner with whom the union citizen has a durable relationship, duly attested”.

The regulations use the term “permitted family member” for the article 3 category of more remote family members.

Ms Justcie Baker said the regulations permit a plain reading and do not lack clarity or sufficient precision. The word “partner” denotes a person with whom the union citizen has a connection which is personal in nature and akin to, or broadly akin to, marriage, she said. “Durable” does not mean “permanent” but rather a relationship which has continued for some time and to which the parties are committed, with an intent and hope the relationship will continue for the foreseeable future.

Documents furnished by the man tended to show he and his legal advisers had no difficulty in discerning what types of proof was required to meet the test in the regulations, she said.

It is not true to say no guidance has been published to assist an applicant as the relevant application form and the explanatory leaflet contain detailed instructions, she added.

She rejected arguments Irish law fails to sufficiently “facilitate” the application for entry and residence by a person claiming to be a permitted family member.

She disagreed with the High Court that the review decision involved application of an overly rigid and unlawful test of two-year cohabitation. The decision-maker did not confine the analysis to whether the couple could show two-years cohabitation but weighed all of the evidence and considered it to be insufficient. The man probably came here in 2012 and a deportation order in May 2016 was not disclosed on his application form, she noted.