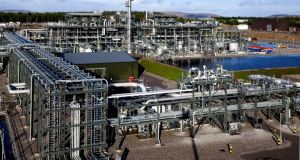 The controversial Shell Corrib gas pipeline project in Co Mayo has suffered a major setback after the Commercial Court today granted an order quashing the revised licence issued for the Shell gas terminal at Ballinaboy.

The Environmental Protection Agency, which issued the licence last June, conceded in court today that Martin Harrington was entitled to that order arising from defects in relation to the board’s carrying out of an Environmental Impact Assessment (EIA) concerning the terminal development.

Mr Justice Peter Kelly granted the order to Mr Harrington, Doohoma, Ballina, Co Mayo, after the EPA said it was not opposing his legal challenge to the revised Integrated Pollution Prevention and Control (IPPC) licence issued by the agency to Shell E&P Ireland. The EPA will also pay Mr Harrington’s legal costs.

The licence had permitted the operation of a gas refinery and combustion installations, with a rated thermal output of 50MW or greater, at Ballinaboy Bridge gas terminal, Bellagelly South, Co Mayo.

Shell E&P Ireland was a notice party to the proceedings and, in seeking last August to have them fast-tracked, said the case had “significant potential commercial consequences” for the €2.7 billion Corrib gas project.

The company said construction of the terminal has been largely completed and it was intended to begin commissioning the terminal gas infrastructure, under the revised IPPC licence, on April 1st, 2014. It was intended it would be carried out by importing natural gas through the terminal’s connection with the national grid through which gas from the Corrib field will later be transported to the market, the company said.

The company added it envisaged work to be carried out related to the project to the end of this year would cost some €170 million under existing contracts and ongoing construction and maintenance costs for the terminal, overall project team and offices.

The company had also recruited a significant number of local staff to operate the terminal, it added. In all the circumstances, the company said it was anxious the case be decided as soon as possible.

In his judicial review challenge, Mr Harrington argued that, in issuing the revised licence, the EPA had failed to carry out an EIA in a manner that met the requirements of various EU directives, including the Habitats Directive.

He also argued that an amendment made to an earlier IPPC licence did not conform with provisions of the EPA Act insofar as it sought to carry out an EIA subsequent to the making of the decision.

He claimed the EPA erred in law in seeking to retrospectively carry out an EIA at a meeting of the EPA board held on June 25th, 2013, when the decision in respect of the IPPC licence had already been made. Such an assessment must be carried out before a decision is made on a licence, he argued.

Insofar as the EPA purported to carry out an EIA on June 25th, 2013, the record of that EIA as contained within the minutes of the board meeting did not amount to an assessment that met the requirements of the EU directives, he said.