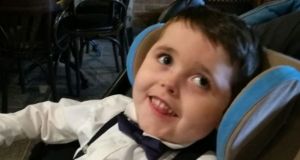 Eoghan Dunne: will require 24-hour care for the rest of his life. Photograph: RTÉ Investigates

A severely disabled child who sued over failures in his care at Portiuncula Hospital in Co Galway has secured a further interim payment of more than €2m at the High Court to meet his care needs.

The payment to nine-year-old Eoghan Dunne is intended to meet his care and other needs for the next five years and brings to more than €4.4m the sums paid to date under a settlement of his case.

The president of the High Court, Ms Justice Mary Irvine, said on Thursday she had no hesitation approving the second interim payment, agreed following a mediation.

Addressing Eoghan’s father Ronan Dunne, who was in court, the judge said the elements of the settlement would not just allow Eoghan to develop to his best potential but permit the entire family to develop and grow.

She extended best wishes to the family and commended them for their “remarkable” work for Eoghan.

The court heard Eoghan, from Cappyroe, Ballinagar, Tullamore, Co Offaly, was a healthy 11 month old child when admitted to Portiuncula Hospital on August 3rd, 2012, having been referred there by a GP who considered he was quite ill and noted he had fever, was breathless and lethargic.

It was claimed antibiotics should have been administered on the child’s admission to the hospital. His condition deteriorated over the following hours and he was transferred to Temple Street Children’s Hospital in Dublin in the early hours of August 4th.

He had developed septic shock, later suffered cardiac arrest and was left with major neurological damage. An internal review of his treatment at Portiuncula was later undertaken, of which the family was unaware for a time. A report of that review was provided to the family in early 2014.

When the case settled in July 2016 with an interim payment of €2.4m to cover Eoghan’s care needs to 2020, the hospital apologised for the failures of care in the child’s treatment and for the manner in which its internal review was undertaken and communicated to the family.

Eoghan’s mother Teresa Dunne, who ceased working as a primary school teacher to look after Eoghan, told the court in 2016 the pain her son had endured over the past four years was “unbelievable”.

She said she forgave the Portiuncula hospital staff for “human mistakes”.

On Thursday, when seeking approval for the further €2.01m payment, Mr Antoniotti said Eoghan is severely disabled in all aspects of his life. He has neurodevelopment injury, spasticity and severe scoliosis, cannot sit, walk or stand unsupported and is fed through a tube.

An irony of the Covid-19 pandemic is that, as a result of widespread wearing of facial coverings, he has not suffered infections which he was prone to before the pandemic, counsel remarked.

The judge remarked on the “fantastic” work by the child’s mother in helping Eoghan develop a switch facility which will assist his future development.

Counsel said the family home has been extensively renovated to meet Eoghan’s needs and includes a hydrotherapy pool. Eoghan, he said, is as active as he can be, is availing of a range of care and other services, and is attending a special education school which he loves.

Rather than seeking a final payment order, it had been decided to seek a five year order, with the matter reviewed in 2025, for reasons including a significant difference between experts concerning Eoghan’s life expectancy, counsel added.

Ms Justice Irvine said it was a very appropriate settlement, the family were very unlikely to do better in an adversarial situation and she had no hesitation approving it. The matter will return to court in 2025 for further review.