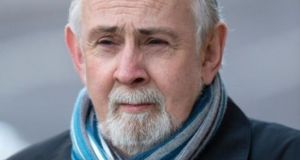 Northern Irish authorities are seeking the surrender of John Downey (66) to face charges in relation to the 1972 Enniskillen bombing.

A Donegal man facing charges in relation to the killing of two Ulster Defence Regiment soldiers in Enniskillen, Co Fermanagh in 1972, has been brought before the High Court on an extradition warrant.

Northern Irish authorities are seeking the surrender of John Downey (66) to face charges in relation to the 1972 bombing. Lance Corporal Alfred Johnston and Private James Eames were killed when a device exploded in a vehicle they were checking on the Irvinestown Road, Cherrymount.

Mr Downey was arrested on foot of a European Arrest Warrant at his home address in Ards, Creeslough, Co Donegal on Monday and brought to the High Court on Tuesday. The warrant was issued by Northern Irish authorities and endorsed by the High Court on Monday morning.

Det Sgt Jim Kirwan, of the Garda Extradition Unit, told Ronan Kennedy BL, for the State, that he arrested Mr Downey on foot of the warrant and cautioned him.

In reply, Mr Downey told the detective “I’d say it was the DUP and not the DPP” who decided to pursue the matter, Det Sgt Kirwan said.

Counsel for Mr Downey, Garnet Orange SC, said his client would be contesting the application to surrender him and was “very anxious” to secure bail. He said Mr Downey had medical conditions and recently had a pacemaker fitted.

Ms Justice Aileen Donnelly said she was satisfied the person before her was the person to whom the warrant related. She fixed November 23rd as the date for the full hearing of the extradition case and remanded Mr Downey in custody to that date.

Ms Justice Donnelly also fixed November 8th for the hearing of a bail application. Mr Kennedy told the court that the State was not consenting to bail but did not object to an early bail application.

Mr Downey’s trial in relation to the 1982 London Hyde Park bombing — in which four soldiers and seven horses were killed — collapsed in February 2014 over a letter sent to him and other alleged republican paramilitaries.

The letters, issued by Tony Blair’s Labour government, told the republicans they were not wanted for prosecution of crimes committed during the troubles.

The “on-the-run” scheme and letters, which fully emerged following the collapse of Mr Downey’s 2014 Hyde Park trial, triggered a major political controversy and lead to an inquiry.

Mr Downey is the first so-called “on-the-run” republican to be charged with offences since the scheme was found by a House of Commons committee to have “distorted the process of justice”.

Speaking outside the court, Mr Doherty, a Donegal TD, said it was his view that the arrest was wrong.

“I think everybody is entitled to justice and I deeply regret any suffering and loss that has happened because of the conflict but that doesn’t take away from the fact that John Downey has been arrested on the first occasion despite having assurances that he was not wanted for questioning in relation to any incident,” he said.

“It won’t be lost on anybody that this has happened at a time when the British government and authorities are looking for a blanket amnesty for their own soldiers given the spotlight is on them for their activities in the North.”