Housing activists are defying a court order by refusing to vacate a property in Dublin's north inner city. The activists previously occupied a house at Summerhill Parade, Ballybough. 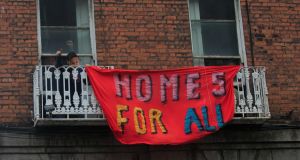 The High Court has ordered a group of people occupying a house at 34 Frederick Street in Dublin’s north inner city to vacate the property by 2pm on Wednesday. Photograph: Gareth Chaney/Collins.

The High Court has ordered a group of people occupying a house in Dublin’s north inner city to vacate the property by 2pm on Wednesday.

The court heard that the people in question are believed to have previously occupied a property at Summerhill Parade, Ballybough. In statements to the media, the occupiers have said their actions are designed to highlight the State’s housing crisis.

The occupiers left the Summerhill property on August 17th last after the owner secured a High Court injunction. There was no appearance before the court by the occupiers, and no representations were made on their behalf.

Helen McCarthy BL, for Ms Ní Greil, said that persons unknown had illegally entered and were in occupation of her client’s property for more than a week. They had no right to be there, and had refused to leave, counsel said.

Counsel said she believed the occupiers were part of a group known as Dublin Central Housing Action.

The orders were being sought on a number of grounds including health and safety and fire safety concerns about the property.

Counsel said her client purchased the building in 2014 and that there is one tenant in the basement with the floors above vacant.

Ms McCarthy said an architect has been engaged as part of the owner’s plans to convert the property into a guesthouse.

Extensive works, including structural works, need to be carried out on the building. These works had been interrupted by the occupation, and the owner’s agents have not been able to gain access to the property.

A purported representative, who would only give the name “Aonghus”, had contacted representatives of the owner in an attempt to discuss the situation. The caller, who did not give a surname, was informed that the matter would go before the court, counsel said.

Mr Justice Quinn said he was satisfied to grant various injunctions, which are to remain in place pending any full hearing of the action, compelling those in occupation to leave.

The judge, who said he was satisfied the occupiers had been served with and were aware of the proceedings, directed that the property must be vacated by 2pm on Wednesday.

The court also made orders restraining anyone from interfering with the properties and stating that the occupiers must remove all their belongings including banners that had been placed on or brought into the building.

Notice of the orders is to be pinned to the building’s doors, the judge added.