Judge says ‘discrepancies’ in different documents have been appropriately explained 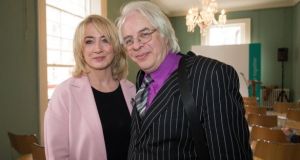 In a judgement given last year, Mr Justice Denis McDonald said he was minded to approving Personal Insolvency Arrangements (PIAs) sought by the couple but wanted certain matters including discrepancies in documents filed by Mr McNamara concerning his inheritance from his late father’s estate clarified.

The matters came before the court on several occasions since last August’s decision was handed down.

On Monday Mr Justice McDonald said he was approving the PIAs, which were opposed by financial fund Tanager DAC and is owed €2.26 million by the couple.

The judge said he was “proposing to confirm” the coming into effect of the PIAs in respect of Mr McNamara and Ms Lowe, subject to confirmation that the estate of Mr McNamara’s late father “be administered and the assets realised within a relatively short period.”

In his judgment the judge said that “discrepancies have been appropriately explained.”

The PFS was completed in support of his application in October 2016 to be allowed enter the personal insolvency process.

The PFS stated that Mr McNamara had a half share in his late parent’s house worth €500,000 with his sister, and that he derived a monthly rental income of €800 from the property.

The SFS stated his share in the property was €182,000 and Mr McNamara had no income from rent.

The judge said the approach taken by Mr McNamara and “more particularly” his Personal Insolvency Practioner (PIP) in their sworn statements in advance of the hearing of the applications for approval in May 2019 was “unsatisfactory.”

However the judge said this unsatisfactory approach should not result in the dismissal of the application.

The judge, who adjourned the matter to March 20th next said, he would postpone making the formal order approving the PIA’s until the court is informed when it is expected that the assets of Mr McNamara’s late father will be realised.

The couple were not in court for this morning’s judgement.

After entering the personal insolvency process in 2016 the couple, represented in court by Keith Farry Bl, had been seeking approval for PIAs to allow them write off approximately €2.9 million of their debts, and allow them keep their family home.

That debt had been secured against the couple’s family home in Dunshaughlin, Co Meath, which is valued at €550,000.

In addition to Tanager the couple owed money to parties including Bank of Ireland, Banco de Sabadell SA, and to the Revenue Commissioners.

Mr McNamara (59) worked as musical director on the Late Late Show for 20 years while Ms Lowe (56), was a TV presenter before qualifying as a barrister.

Under the terms of the PIA arrangement, which will see the couple return to solvency, the couple will continue to make payments on their mortgage to Tanager.

The PIA is to be funded by monies Mr McNamara will receive in an inheritance from his late father’s estate and also from the sale of five acres in Co Meath.

The proposed PIA will also be funded by lump-sum payment of €100,000 and €30,000 from a life insurance policy when it matures in seven years.

The court also heard Mr McNamara has obtained some work doing music at funerals, and some of this additional income will go to the creditors.

In his decision last August, Mr Justice McDonald noted that if the couple were to become bankrupt Tanager would realise 22 cents in the euro, whereas under the proposed arrangement it would receive 27 cents in the euro.

Tanager had opposed the PIA on various grounds including that the arrangement would unfairly prejudice its interests, and that the PIAs would not allow it to recover the debts due to it to the extent that the couple’s means reasonably permit.

It further argued that a debtor’s requirements under the 2012 Personal Insolvency Act of making a complete and accurate prescribed financial statement had not been satisfied.