Man charged with the murder of Jasmine McMonagle in Donegal 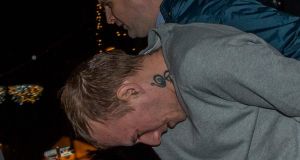 Richard Burke (front), is seen leaving a special sitting of Sligo District Court on Saturday evening where he was charged with the murder of Jasmine McMonagle in Forest Park, Killygordon in Co Donegal. Photograph: James Connolly

A man has appeared in court charged with the murder of Jasmine McMonagle in Co Donegal.

The man, Richard Burke, was charged with murder at a special sitting of Sligo District Court before judge Kevin Kilrane on Saturday.

The accused, who was represented by solicitor Frank Dorrian, did not speak during the brief appearance.

Det Sgt Michael Galvin told the court that when he arrested Mr Burke, of 49 Forest Park, Killygordon, the accused replied: “I understand everything.”

Supt Colm Nevin applied to have the accused remanded in custody to Harristown court until Friday, January 11th, and this was granted by the judge.

Mother-of-two Ms McMonagle, who was originally from Castlefinn, was found dead at her home in Killygordon at 7.30am on Friday.