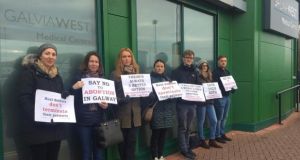 Anti-abortion protesters outside a GP surgery in Galway city on Thursday morning.

Mr Harris has promised to introduce legislation for such zones.

Ms Smyth, the co-director of the Together for Yes campaign in the referendum to repeal the Eighth Amendment, said Mr Harris and his Department needed to move as soon as the Dáil returns to ensure the introduction of such legislation, “so that women are safe and their rights are respected.”

The anti-abortion group stood outside the Galvia West Medical Centre for several hours on Thursday morning bearings signs such as “Say no to abortion in Galway”, and left before lunchtime.

A photo of the protest was posted on social media with a message claiming the clinic was picketed because it was “on the HSE list as being an outlet for the abortion pill”.

The protest sparked renewed calls for the introduction of exclusion zones to prevent women seeking terminations from facing protests when accessing services.

Meanwhile, the HSE has warned of a number of websites claiming to offer pregnancy support services using a web address that is a variation of that of the official MyOptions site.

The websites had achieved a high listing on Google, but have since disappeared.

Solidarity TD Ruth Coppinger has also criticised a decision by the Rotunda Hospital in Dublin to accept abortion referrals only up to 11 weeks into a pregnancy.

Ms Coppinger called on Mr Harris to clarify with doctors that terminations can be accessed up to 12 weeks into a pregnancy, as provided in the legislation on the issue.

In a statement on its website, the Rotunda Hospital said: “Given that medical termination of pregnancy can occasionally take several days or even up to a week to complete, the Rotunda requires patients to be no greater than 11 weeks’ gestation when this process is commenced, so that patients can confidently expect to complete the termination before the 12-week legal limit.”

The MyOptions helpline, which is the main point of referral for women seeking a termination, was said by the HSE to be busy in its first days of operation, and at least 20 women sought abortions through GPs on Wednesday.