Coveney rules out allowing sale of US beef in Ireland 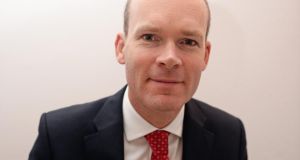 Minister for Agriculture and Food, Simon Coveney: ““We cannot allow Ireland to compete in the European markets with product that is coming in from the United States that has a fundamentally different set of rules in terms of how it is produced.” Photograph: Eric Luke/The Irish Times

Minister for Agriculture and Food Simon Coveney has ruled out a matching agreement to allow US beef to be sold in Ireland if Irish beef products are, as expected, permitted back into the US market. He said that allowing US hormone-injected beef into Ireland was a “red line” issue for him.

Mr Coveney, in Washington on the final day of his US trade and investment mission, said that allowing products from US cattle injected with growth promoters and output-increasing medicine would be “a huge stumbling block” in discussions to agree an EU-US trade pact.

“We cannot allow Ireland to compete in the European markets with product that is coming in from the United States that has a fundamentally different set of rules in terms of how it is produced,” he said. “To put the Irish beef industry at a competitive disadvantage – you cannot do that and won’t do that.”

US veterinary inspectors will audit Irish beef-processing factories next month, which Mr Coveney has said will lead to the US market opening up to Irish beef for the first time since 1997, when a BSE-related ban was introduced. He said the EU might permit the sale of a certain quota of US beef as long as it was free of hormones and growth promoters, similar to an agreement with Canada.

He also met US retailer Wegmans, which has 83 stores on the east coast, to discuss selling high-end Irish beef products from this autumn.

The Minister expects US trade negotiators to use the opening of the US market to Irish beef to push Europe to offer something in return, but he said there were “fundamental differences of opinion” on how the US and Europe regulate agricultural produce and what they permit in food production.

The US regarded medication use in food production to build muscle mass more quickly or to produce more milk as “absolutely safe”, while the EU said medicine should only be given to sick animals.

Mr Coveney said the EU “will really not budge” on approving the use of growth promoters and hormones in food production. However he saw “room to manoeuvre” in negotiations on “geographic locators”, which prevent US cheesemakers from using names such as feta and Gorgonzola that the EU says can only be displayed on products made in certain areas of Europe. “There is a discussion that can and will develop around protecting certain sensitive products while allowing flexibility on others,” he said.

Mr Coveney added that the 40,000 tonnes of cheese processed every year at the Irish Dairy Board’s two facilities in Minnesota and Wisconsin could be sourced from Ireland under the EU-US agreement. He opened the final part of the $80 million facility, which processes block cheese into cheese products, on Wednesday in Thiel, Wisconsin.