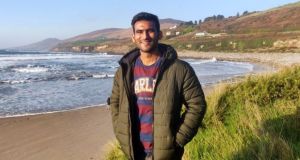 Anand Goel died after he fell from the Cliffs of Moher on January 4th last year.

A German couple saw a Trinity College student take ‘lots of selfies’ at the edge of the Cliffs of Moher moments before he fell to his death in January.

At a coroner’s inquest in Ennis today, Clare County Coroner, Isobel O’Dea returned a verdict of accidental death for Indian national, Anand Goel (26) at the beauty spot on the Friday afternoon of January 4th last.

Ms O’Dea said: “It is quite clear that Mr Goel was taking selfies in what proved to be a very dangerous place.”

She said: “There has been no evidence that there was any intention by him to do self harm and very much the evidence of all of the witnesses was that Mr Goel was taking selfies in the sunshine before he fell.”

A deposition from German tourist, Nadine Stoeckl said that Mr Goel “was taking selfies, lots of them” at the Cliff edge just after 3pm on the day.

Mr Goel had travelled from Dublin to the Cliffs earlier that day as part of a Paddywagon tour.

Ms Stoeckl was with her boyfriend, Leo Voehringer on the cliff walk leading to Hag’s Head “and we were discussing how dangerous it was where he was sitting”.

Ms Stoeckl said: “He was sitting with his back to the sea and the sun was to the right of him and he was taking selfies straight at him facing the camera with the sea in the background.”

In his deposition, Mr Voehringer told the inquest that they were 15m away from Mr Goel.

Mr Voehringer said “I told my girlfriend not to look at him anymore – we kept turning around to watch him.”

Ms Stoeckl said: “Myself and my boyfriend were chatting and then I looked around and I saw that the man who had been taking the selfies falling.

Another tourist, Madeleine John from Victoria, Australia was further away – around 200m to 300m and told the inquest “I saw a man falling and I heard him screaming ”.

Ms John said: “I stood there for a couple of minutes in disbelief trying to figure out if it was real.”

Onlookers raised the alarm and a nearby coastguard helicopter diverted to the cliffs .

In his deposition, winch-man with the Irish Coastguard helicopter, Michael Sandover said they detected the remains at the base of the Cliffs through heat signalling technology some 3km north of Hag’s Head. This was after witnesses at the top of the Cliffs waved them to the scene.

A postmortem concluded that Mr Goel had died from severe skull damage consistent with a fall from a height.

No members of Mr Goel’s family were present today for the inquest and Ms O’Dea said that they will be notified of the findings of the inquest.