‘That was rude, I’m a good person, not a whore’ victim told Nevin in one message 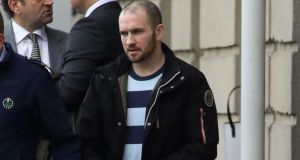 Patrick Nevin has been jailed for five and a half years for sexually assaulting a student he met on the Tinder dating app in July 2014. File photograph: Collins Courts

During Patrick Nevin’s trial for sexually assaulting a Brazilian student he met on Tinder at Dublin Circuit Criminal Court last winter the jury heard details of the text message exchanges between him and his victim.

In her direct evidence and aided by a courts appointed translator, the woman told the trial that she repeatedly had to use Google Translate during these communications and often misunderstood the meaning of texts sent by Nevin, including references to sex.

After exchanging phone numbers on Tinder she and Nevin continued to communicate by exchanging texts and images on WhatsApp.

Very shortly into these text exchanges Nevin was asking the woman to send on photos to him and to meet with him. After sending a “selfie” picture he replied “nice, you’re sexy, any more pix?”

She told the trial she didn’t understand when he wrote “are you a good kisser ha?”.

He later wrote “I will teach you many things about what a man and woman can do together if you want to”. She agreed that this suggested that “maybe he wanted sex”.

Her reply to this text was “calm, I speak seriously”. She told the court that she thought this would be enough to tell him “I don’t want this, I want to learn”.

Nevin then texted her “well I only want to f**k you” and she replied with a “sad face”. In cross-examination counsel put it to the witness that it was very clear from this text that “what this man wants is sex”.

Asked why she didn’t end the conversation then, the complainant said: “Because I’m stupid”.

She replied to Nevin “that was rude, I’m a good person, not a whore” and he apologised.

The exchange continued for days with Nevin often texting the woman first thing in the morning and texting her throughout the day.

In one exchange she told Nevin that she had cried that day because she was missing her family. He replied : “would you like to meet and be friends so”.

Under cross examination from Nevin’s lawyers, the woman said that statements by Nevin to gardaí­ that they were meeting up for sex were “completely crazy”.

“I never said to him I wanted to have sex with him. Not on Tinder. Not on WhatsApp.

Paul Flannery SC, defending, put it to her that topless photos of the defendant on his Tinder profile were “sexual poses”. She said she didn’t agree.

Counsel also put it to her that photos on her profile “have a bit of a sexy look about them”. She said they were professional shots of her modelling jewellery. She denied that she was using the Tinder app to get sex.

After his arrest Nevin told gardaí­ that he took it that he and the complainant were meeting on the night “to probably have sex”.

“During the banter I asked her would she like to star in a film with me and she said ‘this interests me very much’,” he claimed.

He said “the purpose of meeting her was hoping to have sex with her and to seduce her”. He said some women he met would have sex after 20 minutes.

He said he drove her to UCD and said that summer he’d met multiple girls “off the dating site” at that location. He said he knew the campus “extremely well” from going to college there.

Nevin (37) with former addresses of Mounttown, Dun Laoghaire, Dublin and Castlebellingham, Co Louth, was convicted of sexually assaulting the student when they met for a first date, after “matching” on the Tinder dating app in July 2014.

In jailing him for five and a half years on Tuesday Judge Cormac Quinn said that using Tinder did not amount to consent for sexual activity.