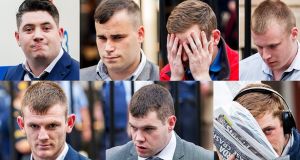 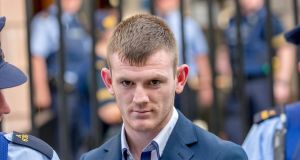 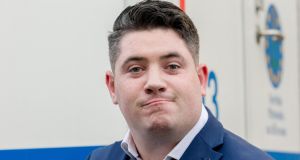 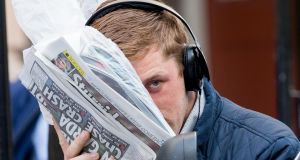 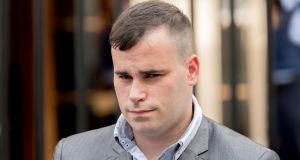 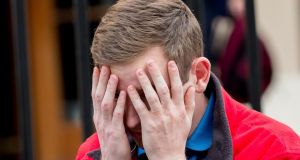 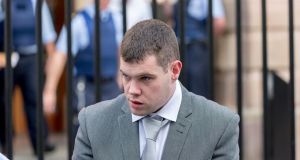 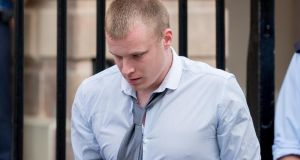 Prison terms ranging from 12 years to 20 years have been imposed on seven men who admitted carrying out an aggravated burglary during the night at the home of a young family in Co Tipperary two years ago.

Sentences were handed down at Clonmel Circuit Court by Judge Thomas Teehan, who described the effects of the burglary on the Corcoran family from near Killenaule as “catastrophic”.

He said the crime committed by the gang was near the top end of the highest level of seriousness for this type of crime. It had “shocked an entire nation” and was an affront to the law-abiding citizens of Ireland.

Parents Mark and Emma Corcoran were in court as the men, all in their 20s and from Dublin, were sentenced to prison terms, having each pleaded guilty on earlier dates to a single count of aggravated burglary.

The court heard earlier in the week that the “terrified screams” of the Corcorans’ three young daughters, aged eight, six and two at the time of the burglary, could be heard by gardaí through a 999 call made by Emma Corcoran as the burglary was taking place in the early hours of November 21st, 2013.

“The five were awoken from sleep in the family home in the most violent manner by what must have seemed like an army of sinister-looking intruders,” the judge said when he passed sentence.

“No human being of any age should ever have to witness such an egregiously violent scene, and most especially in their own home,” Judge Teehan said. “All three children have been emotionally scarred by this ordeal. The effects on . . . the youngest are particularly harrowing, even though she did not witness directly, as did her sisters, the full horror of what happened to their parents.”

He said the level of gratuitous violence visited on the two adults, neither of whom was in any way a physical threat to the raiders, was quite terrifying. “In the light of this, the unfortunate occupants had every reason to take very seriously indeed the horrifying threats which were shouted.”

The Corcorans had had to close their successful gym equipment business because of the incident and had also suffered other major financial losses because of securing their home and through medical expenses. “Taking all of these effects together, it is clear that the Corcoran family, and each individual member, have suffered catastrophic changes to their lives,” Judge Teehan said.

Other people who might be contemplating similar crimes should know there could be “a very heavy price to pay” for such crimes. “This is a message which must go out in the clearest and most unequivocal terms.”

Dean Byrne (22) of Cabra Park, Dublin 17, was given a sentence of 20 years, with four suspended. He had 120 previous convictions.

Patrick Gately (28) of Primrose Grove, Darndale, Dublin 17, was also sentenced to 20 years, with four suspended for 10 years. He had 85 previous convictions.

John Joyce (21) of Lentisk Lawn, Donaghmede, Dublin, was sentenced to 15 years, with four suspended. He had 55 previous convictions.

Patrick Joyce (23) of Beaumont Hall, Beaumont Woods, Dublin 9, was given a sentence of 14 years, with four suspended. He had 16 previous convictions, none for violent offences.

Thomas Flynn (21) of Moatview Avenue, Coolock, Dublin 17, was sentenced to 12 years in prison, with three suspended. He is already serving a three-and-a-half year sentence for a separate offence and had 20 previous convictions.

Donal O’Hara (22) of Glin Park, Coolock, Dublin 17, was sentenced to 12 years, with seven suspended. He had 19 previous convictions.

Michael McDonagh (23) of Tara Lawns, Belcamp Lane, Coolock, Dublin 17, who was the only defendant with no previous convictions, was sentenced to 12 years, with seven suspended. He was “anxious to rehabilitate,” the judge said.

All the suspensions were for 10 years and to come into effect upon leaving prison, under conditions including keeping the peace, staying free of alcohol and drugs and engaging with the Probation and Welfare Service.

The only time any of the defendants spoke in court was to acknowledge the terms of their suspension bonds.

Judge Teehan offered his best wishes to the Corcorans, who live in the townland of Burnchurch outside Killenaule.

“I’m quite certain everyone in court has enormous sympathy for what you have endured,” he told the couple.

“I’d like to wish you every possible success and for your children in your efforts to recover from this. No doubt your own determination will be very important in that regard. Nobody could possibly ever forget what you have gone through.”

The judge added that, over the years, he found that the victims of crime “who recover best” from the effects of those crimes are those who found some measure of forgiveness for the perpetrators. “You may find that impossible or at least very difficult,” the judge said.

Emma Corcoran said “thank you, your honour,” in response.