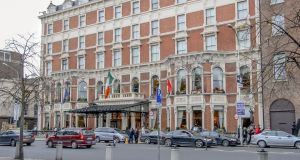 The man ran up a bill of almost €4000 at the Shelbourne hotel in Dublin. Photograph: iStock

A man who ran up bills of over €8000 and enjoyed “fine wine and dining” at two five-star Dublin hotels using a stolen credit card has been jailed for one year.

Mason has 71 previous convictions in a number of countries, many of which are for theft and fraud. “He is incorrigible,” Judge Nolan said.

Mason, with an address in Crowlane Walk, London, pleaded guilty to two counts of dishonestly inducing the hotels to accept fraudulent credit card payments on dates between December 29th, 2019, and January 19th, 2020.

Garda Mark O’Neill told Karl Finnegan, prosecuting, that Mason checked into the Shelbourne hotel in Dublin on December 29th, 2019, using a stolen American Express credit card registered to a woman in the UK.

He left the five-star hotel without paying on January 3rd after staff queried the credit card details. He had run up a bill of €3735, the court heard.

Mason then checked into the Westbury Hotel, where he stayed until January 19th, running up a bill of €4700. In total, he spent €8435 in both hotels.

“He enjoyed himself in the hotels, wining and dining,” Mr Finnegan said. When the credit card was reported stolen, Westbury hotel staff immediately contacted Mason, but he left the hotel without settling his bill.

When gardaí­ viewed CCTV from the hotel, they recognised Mason from an incident in a Dublin restaurant early in January, the court heard. “He had a very distinctive jacket,” Garda O’Neill told the court. “Multi-coloured.”

When interviewed by gardaí­, Mason made no admissions. He has been in custody since February.

The court heard that “associates” of Mason approached both hotels and made offers of payment. The Shelbourne “gladly accepted” this payment, Garda O’Neill told the court.

However, the Westbury declined and referred those persons to the gardaí. Gardaí­ have not been contacted in relation to this payment, the court heard.

Defence barrister Pieter Le Vert said his client was in Dublin on a work venture and he was “trying to impress” people he wanted to invest in the project. He has a partner and child in London.

He is facing a European Arrest Warrant in relation to other alleged offences in the UK.

Judge Nolan handed down a one year sentence and backdated it to February, when Mason went into custody.