‘I was afraid he was going to come and get me,’ says victim of Matthew Horan

Girl describes in impact statement how she felt ‘ashamed, scared and alone’ at age of 10 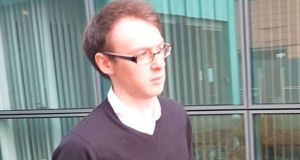 There he stood motionless behind a glass panel, hands clasped at his front – a slight figure, with dark hair swept to one side above dark-rimmed glasses.

The court would be told he had the same level of maturity as the young girls he encountered on the internet.

They included the girl who described, in a victim impact statement, how communicating online with Horan at the age of 10 “was like making a new friend”.

But she said, “it wasn’t. It made me feel ashamed, scared and alone.” She said she felt sad and angry about the exploitation but she wanted to prevent it happening to anybody else.

“I felt scared because I told him where I had lived. I was afraid he was going to come and get me,” she said, in a victim impact statement read out in court on Friday.

Earlier in the week, a father of one victim, a then nine-year-old girl, said his daughter had bought her phone with her Holy Communion money to watch cartoons, dancing and singing online

Altogether, the court was told, there were 15 children involved in the case, and 15 charges, with “50 or 60 counts”, as Judge Nolan put it. The court also heard how Matthew Horan’s father’s house had been attacked “by persons unknown” on Monday night, its front door and windows smashed.

No relatives of Horan’s were in court. Horan, Judge Nolan remarked, “meets criteria for autism spectrum disorder”, based on reports by forensic psychologists Anna Campbell and Dr Patrick Randall.

These indicated that the defendant had “many obsessional or fixated interests throughout his life. It is probable that child pornography became Mr Horan’s autistic fixated interest”. Such fixated interests of people on the autism spectrum could function as a way “of reducing anxiety, as a source of pleasure, and a means of relaxation”, the judge continued.

It was, he said, “a pretty sad case”. Horan had led “a very introverted and lonely life”, but in his actions “he has done a lot of damage”. He “exploited children in the most horrible way” and he knew “what he was doing was deeply wrong”.

Judge Nolan sentenced Horan to nine and a half years, suspending two years, “to give him some hope and some motivation to rehabilitate”.

He then asked a profound question, relevant to similar cases: “Can he be reformed?” The judge pondered on this issue and said: “Hopefully, with the right interventions, he can be reformed... At some point in his life he going to re-emerge from prison. He’s going to have to live in the community.”

The judge concluded by asking that inquiries be made as to “what regimes or interventions are available to reform and change, if at all possible, Mr Horan”.

A spokesman for the Irish Prison Service explained afterwards that treatment programmes for sex offenders were available at the Midlands and Arbour Hill prisons.

They are group-based and can take up to two years, usually towards the end of a long sentence, “for maximum impact”, he said, adding they can be “very, very challenging” for participants.

Hotel restaurants, golf and tennis all in line for reopening but Government to warn ‘every contact counts’ 12:56
New charge of capital murder for Det Garda Colm Horkan accused 12:53
Water body backs EPA call for ‘decade of action’ on Irish environment 11:59
Coronavirus search: How is Covid-19 spreading in your locality? 11:52
Businesses can show ‘Dunkirk spirit’ by taking new direct ferry to France 11:46