Driver with MS who killed pedestrian and injured three others jailed 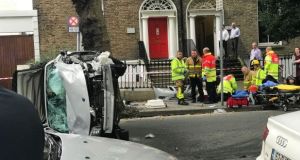 A woman with multiple sclerosis (MS) who lost control of her vehicle and mounted a footpath killing one pedestrian and seriously injuring three others has been jailed for two years.

Rosemarie Gallagher’s car glanced off a tree, crashed into a stone wall and railings, before it hit Benjamin Renard (24) and three other men on Adelaide Road, Dublin 2 on August 22nd, 2017. All four men were thrown into the air at the the point of impact.

The vehicle then crashed into a stone pillar at the entrance of a creche and flipped over onto its side, landing passenger side down and spinning off the footpath out onto the road.

The four victims were walking home from work during rush hour on a summer evening in Dublin city centre.

Mr Renard, who was French, died 15 days later in hospital. He had sustained skull fractures and extensive haemorrhaging which caused swelling of his brain and the injuries were considered non-reversible.

The court heard the had been living in Ireland for a number of years at the time and was on his way home from work as an accountant manager with Linkedin.

Gallagher had been diagnosed with MS 26 years earlier but was considered medically fit to drive. She appeared in court in a wheelchair as her condition has since deteriorated.

She had, however, failed to disclose to her GP an incident in June 2015 in Rathfarnham when she inexplicably reversed her car into a vehicle waiting in line behind her to exit a carpark. After colliding with that car, her car continued to reverse and did not stop until it crashed into two parked cars.

After the fatal collision in 2017, Gallagher told a garda who met her in hospital that she suffered from MS and her leg had stiffened while driving. Gallagher was uninjured in the crash.

Judge Martin Nolan described it as “a tragic and lamentable case” and said it was beyond dispute that Gallagher lost control of her car and caused the death of Mr Renard and serious injury to the three men.

He said it seemed to him from the evidence that Gallagher lost control by reason of her condition.

“She suffered some spasm that affected her legs and I can infer that she hit the accelerator and couldn’t control the vehicle,” Judge Nolan said.

He said that Gallagher was “well warned of the characteristics of her condition” and he noted that if she had reported the accident in 2015 to her doctor there would have been a question of whether she should been allowed to drive or not.

He said it was also clear that Gallagher wanted to live an independent life and was a woman of “extraordinary intelligence and industry”.

“She has beaten the odds in terms of what she can and cannot do. She has a productive and professional life and is a generous and good hearted person,” Judge Nolan continued referring to Gallagher’s work in sourcing temporary accommodation for homeless children.

He said there was no doubt Gallagher was remorseful and ashamed of her actions but added that her driving caused a death, which he said was “a particular tragedy” for Mr Renard’s parents and caused difficulties for those injured.

Judge Nolan said a custodial sentence was necessary and said the two year term would have been “considerably longer” had it not been for Gallagher’s “present lamentable condition”. He disqualified her from driving for three years and refused to postpone her incarceration until after Christmas.