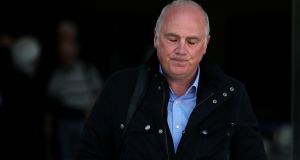 – The 51-year-old former banker from north Co Dublin was found guilty of conspiracy to defraud and false accounting relating to banking transactions he was involved in at the height of 2008 financial crisis.

– A jury of nine men and three women convicted the one-time bank chief executive over a series of circular transactions that made Anglo’s deposits look €7.2 billion larger than they were in September 2008.

– He was also found guilty of false accounting in December 2008 when the bank published misleading information to the market showing those fraudulent deposits in the bank’s annual financial statements.

– He was found to have conspired with ex-bankers Denis Casey, Willie McAteer and John Bowe to defraud depositors and investors by “dishonestly” creating the impression Anglo was healthier than it was.

– The jury reached its verdict after 10 hours and 32 minutes of deliberations over four days at the conclusion of a trial that lasted more than 80 days, one of the longest criminal trials in the State’s history.

– Drumm’s counsel Brendan Grehan SC asked the judge to release him on bail until that hearing as “a humanitarian gesture” as his wife and children were at his daughter’s graduation ceremony near Boston and to get his documentation in order.

- Drumm faces a potentially unlimited maximum jail term on the charge of conspiracy to defraud and up to 10 years in prison on for false accounting.

- The three co-conspirators who were involved with Mr Drumm in the €7.2 billion deposits received substantial sentences when they were convicted in 2016.

– The trial was the sixth criminal action to be taken against former executives of the bank that collapsed into Government control at a cost of €29 billion to the State.

– Drumm is the most senior banker and youngest of the former bank executives to have been convicted in relation to the running of the failed Irish lender and the financial crisis a decade ago.

– His prosecution was delayed by his refusal to cooperate with Garda investigators and to return from the United States to be interviewed in the investigations.

– He was arrested at his home by US federal officers outside Boston in October 2015 acting on a petition from the Irish government seeking his extradition.

– He initially fought extradition and was held a high-security US federal prison south of Boston for five months before he consented to the extradition order. He returned to Dublin in March 2016 to face trial.