Body of cyclist in alleged hit-and-run was ‘driven’ through hedge, court hears 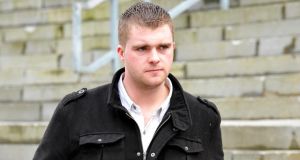 The body of a long-distance cyclist who had gone on out early in July 2012 to train for the annual Ring of Kerry charity cycle was found six hours later in a ditch alongside his bicycle after being “driven” through a hedgerow on the Gneeveguilla to Killarney road, a trial was told yesterday.

Both cyclist and bicycle had been thrown some distance. The vehicle had failed to remain at the scene.

A 22-year-old man who, it is claimed, had been socialising in Killarney until the early hours in the residents’ bar of a hotel, and drove a Toyota Land Cruiser , has gone on trial at the Circuit Criminal Court in Tralee charged with dangerous driving causing death of 42-year-old father of four Paudie O’Leary, from Gneeveguilla.

When arraigned yesterday, Shane Fitzgerald (22) of Knockeen, Knockduff, Meelin, Newmarket, Co Cork, replied “not guilty” to the charge of dangerous driving causing the death of Paudie O’Leary (42), at Scrahanfadda, Gneeveguilla on July 1st, 2012.

The case is expected to take three weeks and “in excess” of 140 prosecution witnesses will be called, Tom Rice, for the DP, prosecuting, outlined to the jury panel.

Mr Rice in his outline to the jury panel said “the prosecution will allege “ that a dark grey vehicle, a Toyota Land Cruiser, “ was involved in a collision with a bicycle at 5.15 am on the morning of July 1st 2012 and that Paudie O’Leary died as a result.

“The vehicle did not stop and the accused did not remain at the scene, Mr Rice continued.

“The prosecution say it was the accused vehicle and the accused was driving,” Mr Rice said.

Shane Fitzgerald was the registered owner of a dark grey Toyota Land cruiser and “the first important strand” would involve tracing the movements of the accused.

CCTV from along the route from Killarney to and Ballydesmond would be shown and there would also be CCTV evidence of Shane Fitzgerald socialising.

The accused had travelled from Newmarket to Killarney on June, 30th. He had parked his car at the Railway station in Killarney.

He had visited popular licensed premises in Killarney alcohol was being consumed, and he continued socialising in the residents’ bar of a hotel until 4.30 am when he returned to his car.

At 5am he headed out of the railway station car park.

Paudie O’Leary was “a long distance cyclist” who would think nothing of cycling 10 miles from his home near Gneeveguilla to Killarney and back again, Mr Rice said.

He had been training for the 112-mile Ring of Kerry Cycle .

By mid-morning when he had not returned, his family became concerned and a search was organised. At 1.15pm his bicycle was spotted by searchers in a deep hedgerow at Scrahanfadda and first responders were called.

The bicycle had been “driven through the hedge into the ditch”; and the corpse of the unfortunate Mr O’Leary was adjacent to his bike.

“The car had not remained at the scene,” Mr Rice said. “Both bicycle and cyclist had been thrown some distance”.

Scientific evidence collected from the scene and analysed would show a connection between a Toyota Land Cruiser and the bicycle, the court heard, and that the right hand side of the bike and the right front of the Land Cruiser had impacted.

Paint taken from the body of the dead Mr O’Leary and from his hair at autopsy was also connected with debris from the scene, evidence would be presented.

The forensic collision investigator James O’Brien will give evidence that the point of impact was in the Killarney bound lane, Mr Rice continued.

Evidence would be given that “the deceased was on his correct side of the road and the driver of the Land Cruiser was on his incorrect side,” Mr Rice said.

Gardai had never found the vehicle and despite thorough efforts “they could not find it,” Mr Rice said. But this in itself was not without evidential value, he said.

The “demeanour of the accused” in the days after the accident would be a further strand: He had gone to the UK within 24 hours, and within weeks he had flown to Australia, the prosecutor claimed.

Staff from a number of public houses in Killarney are also to be called, along with hotels, fast food outlets, and a representative from the cinema in Killarney.

Names of staff members of ferry companies including Stena, P&O, and Irish Ferries were also read from the list as well as staff members from World Wide Flights.

Staff from An Post, the AIB and the motor vehicle registration and motor taxation offices are to be called.

Other names from phone companies, Meteor, Eircom, O2, Telefonica, and Vodafone are to be were read from the prosecution witness list also.

The trial presided over by Judge Thomas E O’Donnell continues.