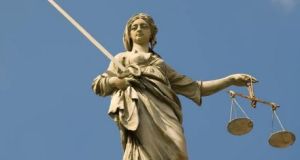 Judge Pauline Codd said the images were “stomach churning” even in describing them, “let alone viewing them”. Photograph: Getty Images

A bar manager was caught in possession of “stomach churning” files depicting children as young as 12 months old being sexually abused, a court has heard.

A laptop belonging to Matthew Johnstone (31) was seized by gardaí and found to contain 22 images and 13 videos of children between the ages of one and 12 years old being sexually and physically abused.

Johnstone, of Brabazon House, Cork Street, Dublin, pleaded guilty at Dublin Circuit Criminal Court to possession of child pornography at his home on November 19th, 2018. He has no previous convictions.

Det Garda Tara Dolan told John Berry, prosecuting, that gardaí were informed by another police service of suspicious activity on an IP address which was linked to the accused’s address on Cork Street.

Det Garda Dolan said the apartment was searched and a number of electronic items were seized. Gardaí discovered that one laptop contained 22 images and 13 videos of children being sexually abused.

Judge Pauline Codd said the images were “stomach churning” even in describing them, “let alone viewing them”. She said she wished to see documentary evidence of the steps the accused has taken to rehabilitate.

The judge adjourned the matter for finalisation on March 24th next.

Many of the images and videos were found in a recycle folder indicating that they had been deleted. Some of the material was found in system-generated files which are created when files are viewed and are not ordinarily accessible to the user.

Gardaí discovered that in the laptop’s search history there was a search for a “TOR hidden service child pornography website” which was used to access several of the video files.

Det Garda Dolan agreed with Fiona Murphy SC, defending, that there had been “limited viewing” of the video files. She agreed that Johnstone had told gardaí he had been in contact with certain people over social media and became involved in the offending through this.

Ms Murphy said her client’s marriage had broken down and he was “on the path” to being divorced. She said he had been employed at a restaurant for more than five years, but he left this employment after the offending came to light.

A previous court sitting heard Johnstone had worked as a bar manager.

Ms Murphy said her client was “genuinely sorry”, and had turned away from this type of activity. She said he fully understood the seriousness of his actions and had attended two counsellors.

Counsel said the court had heard cases in which the number of files went into the hundreds or thousands and that was not the case here, and she asked the court to impose a non-custodial sentence.