Arthritis sufferer found with 5kg of cannabis gets suspended sentence 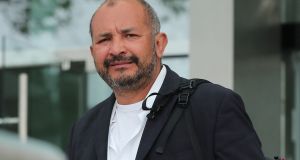 An arthritis sufferer who was using cannabis to treat his pain has received a suspended jail term after being caught with more than 5kg of the drug.

Gardaí searched Alex Bravo’s flat in Dublin city centre on August 3rd last year after receiving confidential information that drugs were being held there for a criminal gang.

Bravo (60) pointed gardaí to a suitcase which contained an Iceland freezer bag with 5½ kilo blocks of cannabis resin. The estimated street value of the drugs found was €31,460.

Bravo told gardaí he used cannabis to treat the pain of his arthritis. The court heard he was microdosing, using two-10ths of a gramme of cannabis oil.

His lawyers told the court the purpose of this was to manage pain, not to get high.

The criminals supplying Bravo with the cannabis asked him to store the drugs found in his flat on Sherrard Street, Dublin 1, and he was afraid to say no, the court heard.

He pleaded guilty at Dublin Circuit Criminal Court to possession of drugs for sale or supply.

He has being living here for a number of years and is a hardworking man, she said.

She suspended a sentence of 2½ years after noting his previous good character. She ordered that he engage with offence- and victim-focused work.