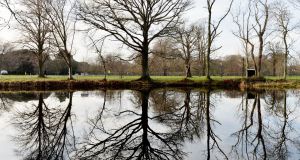 A marathon running chef has had a €60,000 damages claim thrown out after a judge told him he did not accept he was sitting in his car when it was hit by a reversing motorist in Dublin’s Phoenix Park (pictured). File photograph: Alan Betson/The Irish Times.

A marathon running chef has had a €60,000 damages claim thrown out after a judge told him he did not accept he was sitting in his car when it was hit by a reversing motorist in Dublin’s Phoenix Park.

Judge Terence O’Sullivan told Tomasz Wojciechowski in the Circuit Civil Court that he considered the claim a “try on” and that he was entirely satisfied he “was not in the car at all” at the time.

Mr Wojciechowski denied, when cross-examined by barrister Tom Clarke for RSA Insurance and driver David Nugent, that he was actually walking towards the car when he saw Mr Nugent reverse and collide with it at a race meeting in the park.

Mr Clarke said Mr Nugent would tell the court he had erred in reversing and colliding with Mr Wojciechowski’s car but clearly saw him walking towards and pointing at his car seconds after the incident.

It was claimed that Mr Wojciechowski’s car was parked in the grounds of Civil Service Cricket Club in May 2015 and that he had been sitting bent down in it tying his shoe laces when it was “jolted”. The position he was in was a problem that had exacerbated the extent of his injuries, he claimed.

He had been in the Phoenix Park for running training at the time of the incident.

In his damages summons, Mr Wojciechowski claimed that on the evening of the incident his neck started causing him pain and he vomited a couple of times that night.

He had attended his GP who found tenderness on examination of his right and left trapezius muscles. The court heard he also had a restricted range of movement of his cervical spine and had been advised to do neck exercises and use paracetamol and anti-inflammatories.

Mr Wojciechowski received physiotherapy but still had neck and shoulder discomfort and intermittent numbness four months after the incident.

Dismissing the claim and awarding costs against Mr Wojciechowski , Judge O’Sullivan said there were certain aspects of his claim which were “troubling” to the court.

He said he had found Mr Nugent to be a reliable witness but considered Mr Wojciechowski to be “trying it on.”