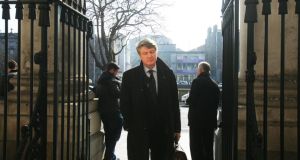 The Court of Appeal extended by a day the suspension of a High Court order requiring solicitor Brian O’Donnell and his wife Mary Patricia to vacate a mansion in the Dublin suburb of Killiney.

The appeals court extended the stay pending the outcome of the couple’s challenge, which began yesterday and is expected to conclude this afternoon. They want the court to overturn last week’s High Court decision granting a trespass order to Bank of Ireland and receiver Tom Kavanagh.

The receiver wishes to sell the house, Gorse Hill, valued at €7 million, to meet part of a €71.5 million debt owed by the O’Donnells for various unpaid property loans.

Before the three-judge appeals court, Mr O’Donnell argued that he and his wife had a contractual right of residence at Gorse Hill based on an agreement with Vico Limited, the entity that owned the house.

He told the court Bank of Ireland had abused the court process by obtaining discreet orders through “salami litigation” rather than looking at the wider picture, which would disclose “criminal action” by the bank.

He said the bank had suffered no loss by not having taken possession of the house, and its spending on legal and receivers’ fees in the case probably exceeded its valuation of Gorse Hill.

Mr O’Donnell also argued there was evidence of objective bias by Mr Justice Brian McGovern who, he submitted, should have recused himself from hearing the case after the O’Donnells raised issues in relation to the judge’s wife and previous litigation relating to a partnership involved Mrs McGovern.

It was also incorrect to say that Bank of Ireland was a party to litigation in which Mr Justice McGovern’s wife had been involved, he said.

Mr Ferriter said there was “no credible, valid basis” to the suggestion that Mr Justice McGovern should have recused himself.

Mr O’Donnell’s wife, Dr Mary Patricia O’Donnell, told the court she was “perfectly happy” that her husband was appealing the High Court’s order.

The exchange occurred after Ms Justice Mary Finlay Geoghegan had told Mr O’Donnell the court would need to hear directly from his wife that she was adopting the same position as him. “The days have gone of relying on the husband to say that is what his wife wants,” Ms Justice Finlay Geoghegan said.

Mr Ferriter is due to continue his response when the case resumes today.