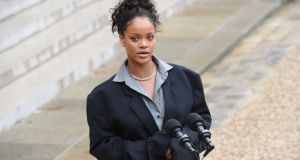 Dana Kavanagh is suing for damages and loss of earnings arising out of what she says is a false and malicious email, sent to her by Rihanna, containing what she says are untrue references to her partner Geoffrey Keating. Photograph: Christophe Archambault/AFP/Getty Images

A woman claims in High Court proceedings her business was destroyed by a false email and rumours circulated by singer Rihanna about the woman’s partner.

Dana Kavanagh (43), of Woodbank Drive, Valley Park, Finglas, Dublin, is suing the Barbados-born singer under the name Robyn Fenty, aka Rihanna, with an address in New York, USA.

The case was before the court this week for mention and adjourned to next month on consent between the parties to allow Ms Kavanagh provide an affidavit.

Ms Kavanagh is suing for damages and loss of earnings arising out of what she says is a false and malicious email, sent to her by Rihanna on July 11th 2013, containing what she says are untrue references to her partner Geoffrey Keating (39). Mr Keating worked for the singer during 2012 and 2013.

A separate High Court defamation action over the email, brought by Mr Keating against Rihanna, was discontinued in 2015.

Ms Kavanagh says, as a result of Rihanna’s claims, a business which Ms Kavanagh had built up with Mr Keating, called Geoff Keating Media, had to cease trading. She says it had a client list of over 5,000, 95 per cent of whom were female and it attracted other high profile celebrities.

By December 2013, she says, she and her partner were struggling to keep the business running and the client list was decimated. This was exclusively the result of malicious rumours emanating from the defendant, she says.

Their business began receiving calls from former clients claiming stories were circulating about allegations which are the subject matter of the case being taken over the July 2013 email.

Ms Kavanagh says Rihanna disseminated the information in that email to third parties, including Ms Kavanagh’s sister-in-law, with intent to injure Ms Kavanagh and cause her damage in the course of her business.

She says despite years of toil in building up a successful business and brand, it was destroyed in a matter of days by the defendant, and she was receiving social welfare as she had lost her income.

Ms Kavanagh, who has been with Mr Keating for 14 years and with whom she has four children, says they had been planning a wedding around the time of the email but it was cancelled as a result of events which gave rise to this case.

Her life has been a daily struggle and routine events, such as attending a school function or sports day, are upsetting and traumatic because of the accusation. She sees no prospect of the situation improving in the future.

She says the defendant has failed, refused or neglected to retract the allegations or offer an apology.