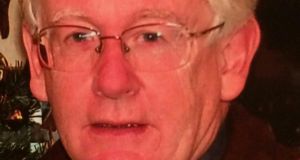 Brian Doolan (72), a former senior law lecturer, pleaded not guilty to 44 charges of sexual abuse, including 11 counts of rape. He was convicted on 42 of the charges and sentenced to 12 years, with two suspended.

A prominent legal academic who authored a definitive legal text now in its eighth edition is serving a 10-year sentence for sexually abusing his nephew.

Dubliner Brian Doolan (72), a former senior law lecturer at Dublin Institute of Technology and well-known legal author, was jailed more than a year ago but could not be named at the time because of court reporting rules.

He pleaded not guilty to 44 charges of sexual abuse, including 11 counts of rape. He was convicted on 42 of the charges and sentenced to 12 years, with two suspended.

Now, however, his nephew and victim, Stephen Kershaw, has publicly spoken about his ordeal at the hands of his uncle.

He is highly critical of the justice system, saying he felt under attack during the trial.

“If I had known it would be like this I wouldn’t have done it - and that’s the God’s honest truth,” Mr Kershaw told The Irish Times. “I’ve said to [support agency] One in Four not to let me talk to any other victims because I’d advise them not to do it. It’s terrible.”

In the early 1990s, Doolan became one of the first single men in the State to adopt a child from abroad, though his history of abuse was not known to the authorities at the time the adoption was approved. His son, who is originally from Eastern Europe, is now an adult living in Dublin.

Meanwhile, Doolan registered a bogus birth in Dublin in 1984 using his own name, but with a false address for a property in Castleknock that did not exist, in preparation for a bid, gardaí believe, to travel to Asia and acquire another child to bring back to Ireland. However, he quickly regretted using his own name, The Irish Times has been told.

Doolan’s best-known work is Principles of Irish Law. One of seven legal texts he has written, the book was first published in 1981. The eighth edition was published in 2011.

Extraordinarily, the eighth edition included chapters on the finer points of children’s rights under the law at a time when he knew a major investigation into his own crimes was nearing conclusion.

Now happily married, Mr Kershaw said he is “done and dusted” with the abuse he suffered in the past: “I don’t make decisions in my life now based on what happened back then. I’m not going to stop my kids going on sleepovers because of what happened to me. That would be him deciding how I run my life.”