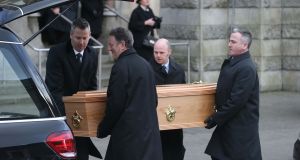 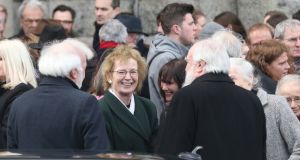 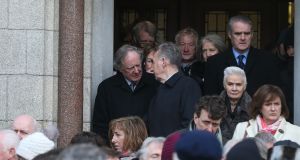 The former Supreme Court judge, Donal Barrington, saw the Constitition as a living, breathing document that respected the human rights of all, his funeral mass heard on Saturday.

He stood for a pluralist and tolerant Ireland, was a great admirer of John Hume, and promoted ideas in the 1970s, some of which eventually found expression in the Belfast Agreement.

There was a large turnout from the world of law, politics and journalism at the mass in St Patrick’s Church, Monkstown, Co Dublin.

In his eulogy, Brian Barrington said Donal Barrington was just two years old when his mother was left a widow with no pension and five children to care for.

Donal Barrington had put himself through school and college by winnning scholarships and had been a barrister for two years before he got his first brief. Success eventually came but he never forgot those who were less fortunate.

During his time as a barrister Donal Barrington successfully represented Mary McGee in the the Supreme Court in a 1973 case that found the legal ban on importing contraceptives infringed the constitutional right of a married couple to privacy. The victory was considered a major breakthrough in family planning in Ireland.

He also represented Co Wicklow nurse Kathleen Byrne, successfully arguing that an Irish citizen could sue the State, and Máirín de Burca who successfully contested the constitionality of men-only juries.

Brian Barrington said his father had imagined the Constitution differently to how it had been previously understood, and saw it as a “living, breathing” document. He stood for a pluralist Ireland and in 1957 he publicly denounced the boycott of Protestants at Fethard-on-Sea in Co Wexford.

In a paper that same year for Tuairim, the think-tank that he helped to establish, Donal Barrington argued for a complete change in the approach of the Dublin government towards partition.

He argued that what was needed was to unite the people of Ireland and not just the territory. Given such views, his son said, it was no surprise that he was an early admirer of Mr Hume and a believer in constitutional nationalism.

He gave advice to a number of political parties in the 1970s but to the SDLP in particular, and some of his ideas ending up finding expression in the Belfast Agreement, “or Sunningdale for slow learners, as Seamus Mallon called it.”

Donal Barrington was also “an enthusiastic supporter of the most successful conflict resolution mechanism in the world, the European Union” and had been honoured to serve as a judge in what is now the General Court of the European Court of Justice in Luxembourg, before going on to serve in the Irish Supreme Court, the Mass heard.

Mr Barrington, who was 89 years old, had become ill in June, his son said. By the end he was ready to go. “We are so, so sorry to see him gone.”