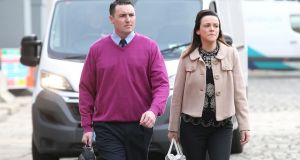 The partner of a garda who says he was targeted for making a protected disclosure has told the Charleton tribunal that Garda Keith Harrison did not want “the fame of being a whistleblower”.

Mark Harty SC, representing Garda Harrison, asked Marisa Simms what she made of suggestions that her partner Garda Harrison was motivated by “attention seeking, jumping on the bandwagon and looking for fame in making a protected disclosure in May 2014”.

Ms Simms said anyone who would suggest this was “not in possession of the full facts”.

In the current module, the tribunal, chaired by Mr Justice Peter Charelton, is looking at contacts between gardaí and the HSE/Tusla relating to Garda Harrison, which he alleges amount to an abuse of power. The tribunal has not yet heard details relating to the protected disclosure.

“This, Tusla, is not even a snippet of what we have endured,” Ms Simms said on Monday.

Ms Simms said she had been followed into a Dunnes Stores supermarket complex by garda cars flashing blue lights, that garda cars drove by her home slowly, and that she and Garda Harrison had received death threats.

“Absolutely no way was this for fame. No way,” Ms Simms said.

Mr Justice Charleton said the tribunal was looking at how a statement was taken from Ms Simms in October 2013, and was not interested in “prurient exploration of anybody’s private life”.

“I don’t believe that anybody giving evidence here has been in any way mistreated,” the chairman said.

Ms Simms said that she first became aware a complaint had been forwarded to Gsoc, the Garda Ombudsman Commission, on her behalf on October 8th, 2013, when she received a telephone call from Gsoc case officer George O’Doherty.

Ms Simms said she was in hospital at the time, and Gsoc was the furthest thing from her mind. She denied she changed her mind about the complaint she had made in a garda statement on October 6th after she spoke to her partner.

Ms Simms denied she was pressurised into changing her mind by Garda Harrison, and said the statement she made to gardaí was intended “for the chief’s eyes only”.

Garda Harrison told the tribunal he believed the referral to Gsoc was motivated by malice towards him.

He said this stemmed from activities while he was stationed previously in Athlone, and because he was in a relationship with Ms Simms, whose brother was charged with the manslaughter of Buncrana garda, Gary McLoughlin, following a car collision.