Two boys and a girl discovered in Newcastle, woman in 40s taken to hospital 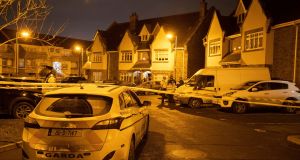 Gardaí at the scene at Parson’s Court, Newcastle, Co Dublin where the bodies of three children were discovered in a house. Photograph: Colin Keegan/Collins Dublin

The bodies of three young children have been found in a house in Dublin and a woman in her 40s has been taken to hospital for treatment.

The discovery was made in a house on Parson’s Court, Newcastle, Co Dublin, after 7pm on Friday evening.

The children – two boys and a girl under the age of 10 – were pronounced dead at the scene. It was unclear how long they had been dead.

Gardaí said their deaths are currently being treated as “unexplained”.

Gardaí believe the woman is the mother of the three children, all of whom are Irish.

It is understood all four were living at the house where the bodies were found.

When gardaí arrived at the scene, in an estate of private houses, the woman was found outside the property. She was taken to Tallaght hospital, where she is said to be seriously ill but is expected to survive.

While the deaths of the three children were being treated by the Garda as “sudden” and “unexplained”, the inquiry into their deaths is criminal in nature.

Gardaí believe the woman holds the information that will explain how the children died.

While the investigation was only beginning on Friday evening, gardaí have no evidence there was anyone else in the house around the time of the children’s deaths.

Gardaí are hoping to speak to the woman as soon as Saturday.

The scene has been sealed off by gardaí and the bodies of the children are set to remain in the house overnight pending the arrival of a pathologist.

Garda sources said a pathologist would carry out a preliminary examination of the bodies at the scene before their removal for a full postmortem.

The same sources said while the results of the full postmortem were needed before the direction of the investigation would become clear, all the resources of a homicide investigation have been committed to the case.

Gardaí were due to remain at the house overnight to ensure it remained a secure crime scene. The Garda Technical Bureau is set to examine the property over the course of the weekend.

Investigating gardaí have asked anyone with any information to contact Clondalkin Garda station on 01 666 7600 where an incident room has been established.

By 10pm, gardaí had blocked all entry to the estate. There was one Garda van and one Garda car outside the house, which was cordoned off with white and blue tape.

Locals described the area as “nice and quiet” with one neighbour saying “Things like this just don’t happen around here.”

Austin Cooney, who lives on the next road said “I was born and reared here and I’ve never seen anything like this. It’s desperate, three small children... it’s not pleasant to hear something like this anywhere.

“I was driving by a half hour ago and saw the ambulances and the police. Someone in my house rang and said ‘Did you hear? I’m hearing a terrible rumour’.”

“I’m involved with the local soccer team, I run the under 11s... I didn’t hear any names so that’s my main concern.”

A woman who gave her name only as Caffrey said: “I’m devastated. Devastated is the only word I can think of. The shock of it, three small children.

“I wasn’t watching the news but my daughter in Canada was and she rang me to tell me.

“Nobody seems to know who it is. But anywhere with three little children... I just can’t comprehend it.”