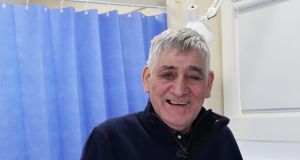 Paddy Hansard: ‘I’ve a long, difficult road ahead of me, and I know that it will be tough, but I’m lucky to be here.’ Photograph: Mark Maxwell/Maxpix

A great-grandfather who was left fighting for his life following an unprovoked attack knows he would not have seen another Christmas and new year without the intervention of medical staff and the unfailing support of his family.

Paddy Hansard (73), suffered serious head injuries and broken bones in his neck due to a horrific attack which took place at around 2.30am on August 17th, at the Courtney Place flat complex in Ballybough, Dublin.

A retired scaffolder, he was on his way home with his partner June from a night out, which they spent in the Clonliffe House pub.

The father of five adult children was rushed to the nearby Mater Hospital by emergency services in a critical condition.

For several weeks he was placed in an induced coma. Eventually he was moved to a high-dependency ward where he remained up until two weeks ago.

As a result of the attack, he suffered three bleeds to his brain which have left him with a permanent brain injury, difficulties with swallowing solid foods, speech constraints and compromised use of the left side of his body.

While he is making progress, albeit slowly, doctors have advised his family that he will need round-the-clock care in the future.

Gardaí continue to investigate the assault. A man in his 50s was questioned for a time by gardaí but subsequently released without charge and a file is now with the Director of Public Prosecutions (DPP).

My family – and by that I mean my children, my siblings and partner June – have been unfailing in helping me

Looking forward to being allowed by doctors to leave the hospital on Christmas Day to visit with his children, siblings and partner, a cheerful yet emotional Mr Hansard, speaking from his hospital bed, said: “I’m very thankful to be alive. I know it could have been a very different story. My family might not have me around anymore.

“Only for the skill, unfailing and continual care of medical staff at the Mater Hospital and here in Cappagh, the tale of Paddy Hansard could have had various outcomes and I’m not unaware of that; it is a shocking reality.

“My family – and by that I mean my children, all of my siblings and partner June – have been unfailing in helping me. Their love, care, kindness has been and continues to be immense. But I’ve put them through so much worry, which has left everyone reeling from the incident.”

Mr Hansard, who has recovered his long-term memory to a good extent, has ongoing difficulty with short-term thoughts. He revealed he remembers a scant amount of what happened on the night of the assault.

“All I have ever wanted was a quiet life. I’ve a long, difficult road ahead of me, and I know that it will be tough, but I’m lucky to be here, ” he added.

His daughter Linda, who works at Cadbury’s, and her four siblings Sandra, Debbie, Paul and Mark are all dealing with what has happened to their father in different ways.

“I’m so very thankful to be sitting beside my father and to be able to kiss and hug him and just look at him. I can’t explain it – the sheer relief. Life stopped for us all because of that night in August. The terror of what unfolded has left us all drained of life,” explained the mother of three.

“The father we had seconds before the attack is not the father and man we have now. Not only has his life changed forever, but so have the lives of his children, grandchildren and great-granddaughter, all of his siblings and close friends.

“In the blink of an eye so many lives have been changed irrevocably. But we have our father with us and that means everything to us all no matter what road his life will now take in the years to come.”