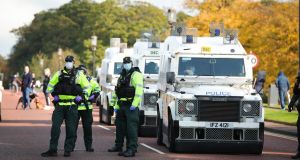 The PSNI is investigating after a man was shot in the leg in west Belfast. Photograph: Kelvin Boyes/Press Eye

Police in Northern Ireland are investigating after a man was shot in the leg in west Belfast in what has been described as a “paramilitary-style assault”.

The man, who is in his 40s, was hospitalised after he was brought into an alleyway at the Creeslough Walk area of west Belfast shortly after 8.15pm on Sunday and shot in his left leg. It’s reported that he was brought into the alleyway by two men dressed in dark clothing who headed towards the Suffolk Road after shooting him.

Det Sgt Stephen Gardiner of the Police Service of Northern Ireland (PSNI) said the shooting was being treated as a “paramilitary-style assault”. Inquiries are continuing, and detectives were still at the scene in west Belfast at 10pm on Sunday.

“Those responsible for this barbaric act do not represent the interests of this community, nor do they contribute anything to it,” said Det Sgt Gardiner. “They do it to try and exert influence, or gain control of those they claim to represent.”

The PSNI is urging anyone with information connected to the shooting to call detectives on 1010 quoting the reference number 1619 25/10/20. Information can also be given anonymously through the independent charity Crimestoppers on 0800 555 111.