Coronavirus: How can jury trials resume amid social distancing rules? 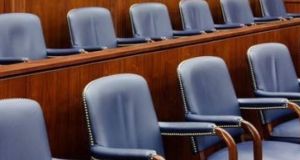 ‘How in the name of Jaysus do we get back to holding jury trials?’ said one person involved who did not wish to be named. Photograph: Getty Images

The organisation that represents most of the State’s barristers is researching the idea of ordinary crimes being tried in non-jury courts as part of the response to coronavirus.

The Bar of Ireland has been making suggestions to the Courts Service and to the judiciary about how best to get the court system back up and running when the Government eases restrictions currently in place.

One of the biggest challenges facing the system is how to resume jury trials in the context of ongoing social distancing rules.

“How in the name of Jaysus do we get back to holding jury trials?” said one person involved who did not wish to be named.

Consideration should be given to using non-jury courts, especially on a consensual basis, he said.

The Bar Council was researching the idea, which he said “should be on the table”.

The right to a trial by jury is cited in the Constitution and any thought of “foisting” a non-jury trial on accused persons would require “very, very careful” consideration, he said.

The senior barrister, who practises in the criminal courts, said it might be that barristers would be slow to advise a client that he or she would have a better chance before a judge than before a jury.

“But there could be some cases,” he said. There was a view among barristers at the moment, “and I think that there’s something in it”, that juries currently apply a presumption of guilt in some types of sex cases, particularly allegations of abuse within the family. In such cases an accused “might have a better chance before a judge”.

Another barrister who practises criminal law said that a significant minority of cases that are awaiting trial involve people who, although entitled to a presumption of innocence, have been refused bail. These cases will most likely have to be given priority once jury trails resume.

He thought it would be very rare for an accused person to opt for a non-jury trial, if such an option became available.

Prior to the lockdown, there was an 18-month wait for a trial date in the Circuit Criminal Court and about a year in the Central Criminal Court.

Cases that are not being heard because of the lockdown are being put back for mention to dates later in the year.

When the two courts resume hearing trials, the question will arise as to whether trials scheduled for later this year, or early next year, should be pushed back to accommodate those that could not be heard during the Covid-19 emergency, making for even longer delays.

“And the longer trials are put back, then the more witnesses’ memories fade,” said another barrister who practises in the criminal courts.

“There is, on its face, a constitutional barrier to it,” he said. “But it doesn’t seem to me to be one that is insurmountable, if we needed to go down thats road.”

The Constitution says that all non-minor criminal offences should be tried before a jury, save in the case of military tribunals or cases heard by special courts established by law because “the ordinary courts are inadequate to secure the effective administration of justice, and the preservation of public peace and order”.