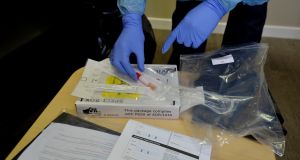 A transparent Covid-19 testing strategy is urgently needed across direct provision centres to stem the spread of the coronavirus among asylum seekers, the Irish Refugee Council has said.

The warning follows reports that dozens of asylum seekers living at the Balseskin direct provision centre in north Co Dublin have been moved to self-isolation facilities after testing positive for Covid-19.

Balseskin is used to house asylum seekers when they first arrive in Ireland. Most only spend a few weeks in the centre before being relocated to other parts of the State, but people with chronic health conditions often spend longer at the centre to have access to Dublin hospitals.

Dr Lucy Michael, of Fingal Communities Against Racism, said residents had reported nearly 100 people testing positive for the virus at the centre and that they were moved to a Dublin hotel on Saturday.

“The lack of information given to residents and uncertainty about the conditions they are going to and the confinement they will experience is causing huge levels of fear and even trauma among residents,” Dr Michael said.

She added that the State’s response to calls for own-door accommodation for asylum seekers, particularly during the pandemic, had been “wholly inadequate”.

It is understood that 22 residents at the former Skellig Star Hotel in Cahersiveen, Co Kerry tested positive for the virus last week while a further 20 people currently being house in Dublin’s Central Hotel on Exchequer Street also tested positive.

Nick Henderson, chief executive of the Irish Refugee Council, said he was “extremely worried” about the spread of the virus in centres, and that the Government and HSE have a responsibility to move people to accommodation where they can self-isolate.

While Irish society may be starting to lift restrictions and re-open the economy, people in direct provision continue to live in congregated settings “which makes them more exposed to the disease,” he said.

“We need a testing strategy for direct provision that is transparent and published with public health information behind it.”

A spokesman for the Department of Justice said testing among almost all residents and staff at Balseskin had been carried out by the HSE and that any person with a positive result was “transferred to an offsite self-isolation facility”.

“Some of our residents may be accommodated in the HSE national self-isolation facility in City West,” he said, adding that the HSE would choose the appropriate location based on the medical needs of the individual.

Balseskin has capacity for 537 people but numbers were reduced to around 350 following the outbreak of the pandemic to enable social distancing.

The department spokesman would not confirm how many people had tested positive for the virus but said there were currently 290 residents at Balseskin and that testing would be completed this week.

On April 30th, the HSE said 62 people in direct provision had contracted the virus with nine clusters and 11 people requiring hospitalisation.

Asked for an updated figure on cases among asylum seekers, a HSE spokeswoman said the official figure was still 62.