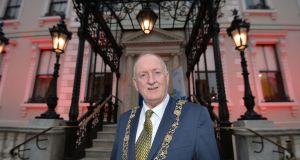 A €1 million claim by a bank to the Clontarf home of Lord Mayor of Dublin Nial Ring and his wife Joyce has been struck out.

Barrister Kate Conneely, counsel for the Rings, told Judge Jacqueline Linnane on Thursday that the couple’s solicitors, Miley and Miley, had transferred almost €1 million to Bank of Ireland Mortgage Bank to meet a €903,000 mortgage debt on their home and legal costs of the bank’s drawn-out bid to take the house off them.

Ms Conneely said the money had been transferred since a previous court hearing earlier this week and the bank’s repossession proceedings could be struck out with no further order.

Judge Linnane had heard earlier the Rings had managed to raise funds from an undisclosed source to settle Bank of Ireland Mortgage Bank’s demands on a three-mortgage debt.

The Rings had asked on Monday last for the proceedings to be struck out on a consent basis but Judge Linnane had declined to do so until the court was assured that the money had definitely transferred to the bank.

Ms Conneely, who appeared Miley and Miley Solicitors, told Judge Linnane on Monday that the extent of the new funds, and where and how they had been raised, could not be divulged on the basis it may breach data protection legislation.

She said funds capable of meeting all outstanding debts owed to the bank and its legal costs had been lodged with Mr Ring’s solicitors ready to be transferred to Bank of Ireland Mortgage Bank.

Judge Linnane said she did not think the proceedings should be struck out until confirmation was received that the funds had been transferred to the bank, just in case of any slip-up.

The judge said her order had been appealed and had come before the High Court on March 15th, 2018. The appeal had been withdrawn and a consent order had been made again on grounds of a stay of 11 months on the basis that €10,000 a month would be paid over that period – again with a stipulation that the stay would be lifted in default of a single monthly payment.

Judge Linnane said that, according to papers in the proceedings, no €10,000 monthly payments had been made and only one payment of €5,000 had been paid over to the bank which had moved to execute the order and send in the sheriff. The Rings had then obtained a High Court ex parte injunction restraining the sheriff from acting on behalf of the bank. The Rings had given the bank an undertaking as to damages which, Judge Linnane said, she thought would not be worth very much bearing in mind the extent of their outstanding debts, which included mortgage arrears of €527,000.

Mr and Mrs Ring did not have to attend court on Thursday when the bank’s proceedings against them was finally struck out.