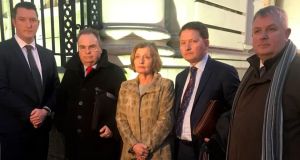 An Taoiseach Leo Varadkar has offered his support to the family of murdered Belfast solicitor Pat Finucane as they continue their lengthy campaign for justice.

Tuesday marks 30 years since Mr Finucane was shot 14 times by loyalists in collusion with British security forces while enjoying Sunday lunch at home with his family. He was 39.

His wife Geraldine and her family met the Taoiseach Leo Varadkar at Government buildings in Dublin on Monday.

Speaking after the meeting, Mrs Finucane said: “It was a very positive meeting and we asked the Taoiseach to reinforce the Irish Government’s commitment to our campaign and request for an inquiry into my husband’s murder.

“He was more than happy to support us. We did ask him if he would come to Belfast to speak and he gave us a very positive response to that so we are very happy with the meeting.

“He realises it’s very important and is at the very centre of legacy issues.”

She added: “The Irish Government sees the relevance of it. We’ve always had to fight, of course, for British support, but I was very happy with the Taoiseach’s response to us today.

30 years since the murder of #patfinucane and today we met the 4th Taoiseach @campaignforleo to pledge support for a public inquiry. We thank him and his government for the continued support. Can't help wondering how much longer it will take the British Govt to keep its promise? pic.twitter.com/SBi1X5ndy1

“He is going to continue to bring the case up with all the politicians that he meets, not only British ones, but he has promised that when he goes to America he will talk about our case there to remind all our supporters in America that our case is still unsolved and unresolved.”

During a special event this weekend in Belfast to mark the anniversary John Finucane said his father was murdered to silence other human rights lawyers.

John was a schoolboy when his father died in front of him.

Mr Finucane said his father represented all sides, while others at the event said he spoke up for the voiceless.

“Whilst it was a public event it remembered Pat as who he was and how he lived his life and that was very emotional,” she said.

Former prime minister David Cameron acknowledged the “shocking” level of state collusion in the 1989 Ulster Defence Association (UDA) killing after receiving a report on the evidence.

Sir Desmond de Silva’s review confirmed agents of the state were involved and it should have been prevented – but ruled out an “overarching state conspiracy”.

The Finucane family has engaged in years of litigation over what they say is the UK Government’s failure to grant an independent public inquiry and strongly opposed the decision to order the de Silva review.

A Supreme Court judgment on legal action connected to the case is pending.

Mr Finucane was from working-class west Belfast and took advantage of the opportunities afforded by university education to become a lawyer during the Northern Ireland conflict.

As a defence solicitor, he represented clients who included convicted members of the IRA and families involved in shoot-to-kill allegations against the former police force, the Royal Ulster Constabulary (RUC).

During the Irish republican hunger strikes in prison during the 1980s he represented Bobby Sands. – PA