Almost 10,000 in emergency accommodation for Christmas 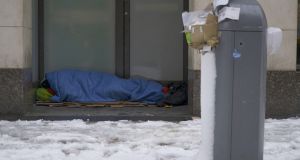 Minister for Housing Eoghan Murphy said an increase in the number of people in emergency accommodation was ‘anticipated’ as rough sleepers were moved into emergency beds. Photograph: Enda O’Dowd/The Irish Times.

Almost 10,000 people will be without a home this Christmas, according to the latest figures from the Department of Housing.

The figures show there were 9,968 people in emergency accommodation at the end of November, an increase of 244 people on the previous month. A total of 3,811 children are included in the overall figure, up by 86 on October.

“It is very disappointing to see more children in emergency accommodation as we enter into Christmas week,” Minister for Housing Eoghan Murphy said.

“I am glad though that for a very large number of families, they will not be spending this Christmas in a hotel thanks to the dedicated efforts of all involved and the continued rollout of new family hubs.”

Mr Murphy said “no increase is welcome but at least these people are now getting better support and care”.

Focus Ireland said the figures show that the Government has failed in a number of its responses to the homeless crisis.

“There is real danger that the people get lost behind the numbers. Christmas is a time for us all to reflect on our lives and our society,” the charity’s chief executive Pat Dennigan said. “We need greater action and must not to tolerate the fact that nearly 4,000 children are homeless in our society. We need to all work to change this in 2019 and the Government must lead the way.”