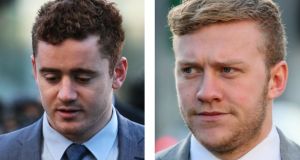 A woman who alleged she was raped by Ireland and Ulster rugby players Paddy Jackson and Stuart Olding said although she consensually kissed Mr Jackson in his bedroom, she was “never attracted” to him.

“You can kiss someone and not be attracted to him,” she said under questioning on Monday by Brendan Kelly, QC, for Mr Jackson at Belfast Crown Court.

This is the fourth day she has given evidence and her third day to face cross-examination from Mr Kelly.

The 21-year-old student alleges she was raped at the east Belfast home of Mr Jackson on June 28th, 2016.

The complainant alleges that she was raped by Mr Jackson and that Stuart Olding forced her to perform oral sex on him.

They all deny the charges, with Mr Jackson and Mr Olding contending that the sex was consensual.

The senior counsel referred to how early on the morning of the alleged rape the complainant left Ollie’s nightclub in central Belfast and got into a taxi with Mr Jackson and two other women to go to an after-party at Mr Jackson’s house.

He adverted to her being “quite hazy” about the details of getting into the taxi because she had been drinking.

Asked about her memory the complainant said people “don’t remember every single second of a night out”.

Further asked by Mr Kelly did drink affect memory the witness said: “I think you would forget little things, yes.”

When asked by Mr Kelly was she happy or sad to be going to Mr Jackson’s house she said she was “pretty impartial” about it.

Questioned about how before the alleged rape she and Mr Jackson consensually kissed in his bedroom, she said she was “never attracted” to Mr Jackson. “You can kiss someone and not be attracted to him,” she said.

Asked to elaborate on the nature of the kiss, she said Mr Jackson “leant forward” and instigated the kiss. “To be honest he sort of lunged on me,” she said.

She also said he tried to undo her trousers at that stage but she would not let him.

Mr Kelly also asked her about why, after she went to Mr Jackson’s house, she texted one of her friends, whom she had been with at Ollie’s but got separated from, to tell her where she was. “Letting friends know where you are on a night out is normal behaviour,” she said.

Mr Kelly then referred to how that friend texted back to the complainant: “Ha Ha.” Asked what her friend meant by this, the witness said; “It’s a throwaway thing; I think a lot of people do it.”

Mr Kelly then referred to how earlier at Ollie’s nightclub that as well as rugby players, there was a separate group of Northern Ireland footballers present.

He put it to the witness that before going to Mr Jackson’s house she was “desperate” to join the footballers at an after-party they were having after the nightclub.

“That is incorrect,” said the witness.

The complainant said she did not like Mr Jackson. She denied staring at him in the house in the initial stages of the party in his house.

She said it was “entirely incorrect” that she was “fixated” on Mr Jackson and could not take her attention away from him.

She said she left the bedroom after the kissing incident because Mr Jackson allegedly tried to undo her trousers. She denied that she engaged in “teasing” conversation with Mr Jackson on that occasion. “I was not teasing Paddy Jackson,” she said.

She also denied that when she said she went to his bedroom the second time to retrieve her clutch bag - the time of the alleged rape - that she in fact followed Mr Jackson to the bedroom. “That is incorrect,” she said.

The witness repeated that she went to the room the second time to get back her bag which she had left in the room from her first visit.

Mr Kelly showed the witness a photograph taken by Mr Jackson in the downstairs room where she had something in her hand. She said she did not know what the item was but that it was too small to be a clutch bag.

‘No for an answer’

Mr Kelly put it to her that the second time that she went to the bedroom, she consensually kissed Mr Jackson. She insisted that was not the case. She said you cannot “under-estimate how scared you are in these situations”.

She said Mr Jackson was “not taking no for an answer”.

Asked about seeking help from the six adults who were downstairs in the house at the time she said: “Mr Kelly, in that situation you don’t scream or shout because you are so scared.”

She said it was “completely incorrect” that at the time of the alleged rape she initiated the move to perform oral sex on Mr Jackson.

The complainant also told Mr Kelly it was untrue that when Mr Olding entered the room she was engaging in a “consensual act” with Mr Jackson. She also rejected Mr Kelly’s statement that she “motioned” Mr Olding to the bed and engaged in consensual oral sex with him.

She said she took her top off during the alleged rape because she was ordered to do so. She did not do it consensually.

Asked why she didn’t seek the assistance of the woman who looked into the room at the time of the alleged rape by Mr Jackson and Mr Olding she said: “What was she going to do?”

The complainant said she was “petrified” the woman might have been intent on filming her, which was why she turned her head away from her.

She added that it was too late at that stage in any case. “I had already been raped,” she said.

There is no hearing with a jury on Tuesday. The trial resumes on Wednesday.