Charleton tribunal: the week in quotes

What they said in Dublin Castle this week 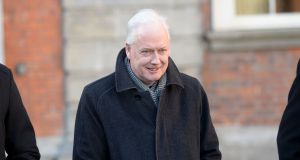 Former minister for justice Frances Fitzgerald explaining why she did nothing in response to receiving an email she said she could not remember reading.

“I was told that I should be cautious because I may well be recorded...I was told to expect that Sergeant McCabe would be somewhat furtive if he was faced with difficult questioning.”

What Garda HR director John Barrett said he was told during a meeting with Nóirín O’Sullivan and others, in February 2015, just before Barrett’s first meeting with McCabe. He did not say who warned him that McCabe might record their meeting.

“Mr [Cyril] Dunne [former chief administrative officer at Garda HQ] asked me to remain in his office after the other attendees had left and with reference to Sergeant McCabe said, we are going after him in the Commission.”

John Barrett, head of Garda HR, on what he claims was said to him on May 13th, 2015, by his superior in Garda HQ. Dunne has said it is not true.

Mr Justice Peter Charleton, responding to something he said he had been told about mention in the media of the tribunal having a Twitter account.