AGSI warns members could strike over right to join a union

Middle-ranking members of Garda challenge Minister for Justice over representation 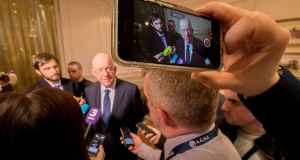 The Association of Garda Sergeants and Inspectors has said its members would consider going on strike in order to gain the right to join a union.

It has demanded urgent action from the Government on the issue. The association said if that was not forthcoming it would consult its members, the Garda’s middle management, over what steps to take.

But Minister for Justice Charlie Flanagan said rather than pressing for trade-union status the association should accept current arrangements and work with the Government to improve them.

Speaking at the opening of the AGSI’s annual conference in Tullow, Co Carlow, he declined to respond directly when asked if he would grant its demands. “I want to work . . . to obviate any need at any time for the gardaí to deploy any right to take industrial action that might jeopardise the security of the State or its people,” he said.

Mr Flanagan noted that Garda representative bodies, in a new development, were now participating in public-service pay talks, being facilitated by the Workplace Relations Commission and the Department of Justice.

The Government was also committed to improving access for the Garda associations to the commission and Labour Court, he said, and enabling legislation was being brought forward. But the association’s leadership said it was determined to secure its members all the rights of other workers.

At present, it and the Garda Representative Association, which represents rank-and-file gardaí, are representative bodies rather than unions. It means they do not have a direct role in negotiating national pay agreements, and under current legislation they would be breaking the law were they to go on strike, or try to organise a strike.

At its annual conference, the AGSI has put a possible Garda strike back on the agenda. Its president, Antoinette Cunningham, said the European Committee of Social Rights had already ruled the ban on gardaí joining a union or striking was unjust.

She said sergeants and inspectors across the Garda wanted action from the Government. Ms Cunningham said it was “discriminatory to shut the door” on Garda members striking. She said emergency cover could be provided any time industrial action was taken.

Her association, she said, had already informed Mr Flanagan of members’ discontent over the issue and pressed on him the need for progress. A response was awaited, though no firm deadline was in place, she said.

“I understand it’s not palatable to some people, the strike issue and police forces,” she said. “But we have to be true to what representative associations actually do, which is to pursue legitimate causes for our membership. We have to take steps to represent our members. And we’ll continue with this campaign until we get a resolution.”

When asked if her members would go on strike for the right to strike and join a union she replied: “Absolutely.”

The AGSI also planned to contact the Policing Authority, Garda Inspectorate, Commission on the Future of Policing in Ireland and other oversight bodies so seek their assistance. Before any action was taken to force the issue, Ms Cunningham said, the AGSI would consult its members.