Want to travel the world on a budget? Wwoof it

TG4’s Mairéad Ní Chuaig has been to many far-flung, exotic places, all for the price of a flight 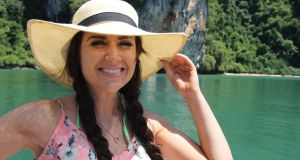 Mairéad Ní Chuaig: “The farms tend to be off the beaten track and you get to live with lovely people. It is a way for people with no money to travel the world.”

How would you fancy spending two months somewhere sun-kissed and exotic for less than 600 quid? This was the question put to us last week by TG4 weather presenter Mairéad Ní Chuaig, and we have to say she turned our head in a big way.

We did the maths and reckoned we could handily Airbnb our house in Dublin and move to an organic farm in Thailand or Barbados or California until the Irish summer – such as it is – and actually make money from our trip.

The commute to work would be a nightmare, mind you. And the school the Popes’ children go to might not be best pleased with their disappearance. So maybe it is not for Pricewatch right now.

But Ní Chuaig has figured out a way to make it work for her and she managed to incorporate a two-month trip to Thailand last year into her day job with the television station and the result of her adventures on organic farms in southeast Asia has now become five-part series, which starts on TG4 later this week.

It is not her first time with a little known – to us at any rate – organisation called Worldwide Opportunities On Organic Farms, or Wwoof for short, and in addition to Thailand it has taken her to Australia, California, across Europe and to a Buddhist retreat in Cavan.

But what in the world is Wwoof? It is a “worldwide movement linking volunteers with organic farmers and growers to promote cultural and educational experiences based on trust and non-monetary exchange, thereby helping to build a sustainable, global community,” is how the website – www.wwoof.net – puts it.

You decide where in the world you want to go, sign up as a volunteer with the Wwoof organisation responsible for the country you plan to visit and you start contacting hosts via its platform to arrange your visit. You cover the cost of getting to and from the place and you pay for any visas that may be needed. Then, in return for between four and six hours’ work a day, five days a week, all your meals and accommodation are covered. Pick the right place and you won’t have to pay for wifi either.

How did a weather presenter from Connemara end up being part of such a world? “I’d been working as a freelance with TG4 for a few years and like all freelancers there was times when I had free time on my hands,” she says. “It was during one such time when I had girl from America staying with me. She was a doctor and I remember her saying she’d been Wwoofing in Aran and I was like: ‘What the hell is she talking about?’”

Ní Chuaig decided to find out. She googled the term Wwoofing and one of the first links she came upon was to a TV production company in Northern Ireland that had been looking for Wwoofers for a programme they had been planning to make about the whole notion. “They weren’t looking for a presenter and the deadline had passed but I still got in touch,” she says.

That random conversation with an American doctor and her decision to get in touch with a production company despite having missed the deadline ended up opening the world to her. It has also seen her make some of the most innovative travel television ever broadcast in Ireland.

She has now Wwoofed (yes, it sounds weird to Pricewatch too) in Australia, California, Ireland, across Europe and – most recently – in Thailand, and when we spoke last week she was in the early stages of planning her next adventure.

There is a lot of trickery involved in television. There is very little that is real about reality television and even less that is real about travel programmes. Hosts tend to fly in for a few days and work like demons while on location and then they fly home, leaving the viewer with the impression that they have just watched someone enjoying a long holiday somewhere lovely.

Ní Chuaig and her co-presenter Tomaí Ó Conghaile don’t do that and they actually live the real experience and spent a full two months in Thailand, living in the same accommodation as all their co-workers on multiple organic farms.

“I think the cool thing about the show is that it is a bit of craic and it is shown as it really is,” she says. “There are no pieces to camera or set-ups. We just film as we go and make a bit of a farming programme and a bit of a travel programme. When we make the programme, there are no hotels at the end of the day and we are sleeping with the other people in whatever accommodation there is.”

It quickly becomes clear Ní Chuaig has fallen in love with Wwwofing as an experience and not merely as a hook for a television programme. “The farms tend to be off the beaten track and you get to live with lovely people. It is a way for people with no money to travel the world. You can stay in one place for up to six months or you can stay there for a week.

“The people you meet are backpackers or couples on their honeymoons or people in their 50s. Everyone really. And, off course, you have hippies. You do get a few slackers as well,” she says. “They show up and don’t want to do a tap of work but they tend to be weeded out pretty quickly.”

She says the “one thing you can’t be is lazy” – that rules out Pricewatch so. “You bring whatever skills you have but you don’t have to know much about farming and you learn as you go.”

She recalls a trip to Portugal – where, incidentally, she got to surf for hours every day as well as the farm work – where she met an Israeli couple on a year-long working honeymoon. “It was on an organic chicken farm and their plan was to go home and use the skills they learned to set their own farm.”

One of the most memorable places Wwoofing has taken Ní Chuaig was Cavan, believe it or not. “The Buddhist retreat there was just amazing,” she says. “I have been all over the world and that was maybe one of the most fantastic places I have ever been to. There was just such a positive vibe.”

She travelled alone and with her partner and groups of girls but says “this is like nothing else. You can travel on your own but you are not alone. You meet people who you otherwise might never meet and get to have experiences you otherwise might never have. Everything is not great all the time, of course it isn’t, but that is part of the craic and part of the travelling experience.”

And who can complain about that? Especially, if it costs a tenner a day.