Empty shelves point to fragility in our food supply

Pricewatch checks out supermarkets’ response to the Beast from the East 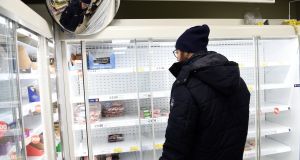 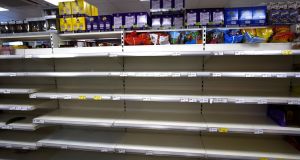 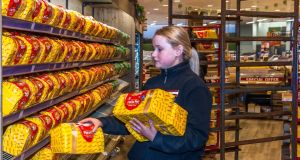 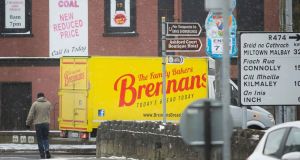 “There are only nine meals between mankind and anarchy,” said the American writer Alfred Henry Lewis in a distinctly alarming piece written more than 100 years ago. Anyone walking the aisles of most of our supermarkets in the immediate aftermath of the departure of the Beast from the East would have been forgiven a momentary chill at his words.

Had a plague of locusts descended on Ireland it could scarcely have done a better job of clearing shelves than Irish shoppers managed in the days before and immediately after the great snow of 2018. It points to a fragility in our food supply that we rarely get to see.

Bread was the first thing to go. The sudden re-emergence of the white sliced pan as the nation’s favourite took Pat the Baker and poor old Mr Brennan by surprise, and as the scale of the storm became apparent and a lockdown loomed, they – and Irish Pride and Johnston Mooney & O’Brien – struggled to keep our shelves stocked.

Milk disappeared next. Much of it had to be poured down drains by already hard-pressed farmers because co-ops had been warned by insurance companies that if their trucks and tankers were sent out on deliveries and were involved in accidents during the status red warning, they would not be covered.

Fresh meat also disappeared as meat-processing plants shut down. And then the processed meat went, as did virtually all vegetables. By the Saturday of the snow, there was pretty much nothing that didn’t come in a tin or a vacuum pack to be found in many supermarkets. Even tinned food sales soared as if we were all heading into a nuclear winter and not three days of snow.

Restaurants were forced to close, either because staff could not get to work (after being warned by the Taoiseach to stay at home and shelter from the Beast) or because suppliers were unable to get food to them.

All these food shortages were prompted by what was – in the global scheme of things – a very minor crisis. Even calling the snow a crisis seems ridiculous in retrospect. It certainly seemed that way to the hardy tourists from Canada, the American midwest and Germany who spoke to Pricewatch as the snow fell, who expressed amazement and rage in equal measure that a country could be brought so quickly to a standstill because of what was – in their view – a light dusting.

If we struggle in a three-day snowstorm, how would we cope if something longer and more complex happened? This is a question to which Stan Blackley, a food systems expert who leads an MSc gastronomy course at Queen Margaret University in Edinburgh, has been giving a considerable amount of thought.

“It is not just bad weather that poses a threat to our food supply chain,” he says. “You just have to look back at the volcanic ash cloud of a few years ago or recent fuel shortages in the UK.”

He points to the example of Venezuela, where middle-class people have been “starving as a result of an inflation rate of more than 2,000 per cent. It doesn’t take that much to destabilise a country. You can take away a lot of things from people and they will get by, but if you take away food and people are hungry then they get desperate and will become more desperate if they can’t feed their children. It really doesn’t take much for that to happen,” he says.

“The real problem is that there is no resilience across our food supply chain. Over the last three or four generations supermarkets have taken over almost every element of that chain and we have got used to having all the food that we can possibly imagine available to us 24 hours a day seven days a week. We have, in effect, become infantilised.” It is not the only time he uses this word.

Blackley says previous generations had more resilience and would have had store cupboards which would have been much better equipped to handle a few days of snow and, crucially, people would have known what to do with the things that were in their store cupboards.

“Just look at all these in-store bakeries that promise freshly baked bread but what they are actually doing is reheating dough. There was all this talk of bread shortages but there was no shortage of baking ingredients on supermarket shelves. But many in-store bakers had no idea what to do with it. They were simply not equipped to bake bread from those ingredients because they didn’t know how. The centralised system that we have has brought us to a satiation where our bakers are not able to bake.”

He says the food supply issues of recent weeks – what happened in Ireland was mirrored in Scotland where he is based – suggests that “consumers have been infantilised by the ease with which we can get our hands on certain things and supermarkets have helped to infantilise us as they hold all levers of power. We would be able to cope a lot better in the longer term if we were eating local food and dealing with local food suppliers – the local butcher, baker and candlestick maker.”

He argues that as long as our food is “carried on trucks 24 hours a day into urban centres then it is always going to be difficult to secure the supply chain in the event of something going wrong. If we see an upsurge in the sale of self-raising flour and UHY milk in the weeks ahead then we will know people have learned a lesson from the shortages but I can’t see that happening.”

Retail expert and DIT academic Damien O’Reilly is perhaps somewhat less alarmist. Lean and agile is the mantra of modern Irish retailers he says and points out that consumers benefit from that.

He says the modern supermarket tends to have very limited in-store space for fresh and chilled foods and have perfected their delivery systems to such an extent that only what they expect to sell on any given day is ever delivered to the shop.

“Even though they expected an influx of shoppers in the run-up to the big storm ,they did not have the capacity to ramp up their orders to a sufficient degree to meet that demand. But, ultimately, the lean and agile supply chain system is of benefit both to the retailers and to consumers because it helps keep prices low.”

He downplays fears that the food supply system may be overly fragile. “We would not have run out of tinned food. And if we start getting weather events like this more regularly, we will probably become much better equipped when dealing with them.”

Aldi’s store and distribution centres were closed for nearly two days and an Aldi spokeswoman said that in the days leading up to Storm Emma, its stores experienced “significantly heightened demand across all our product ranges”.

Fresh meat saw year-on-year sales rise 175 per cent while canned food sales jumped by 143 per cent. Frozen food sales, tea and sweets all climbed by similar percentages. “Pet care sales also grew by 300 per cent, showing that customers were making sure that their four-legged friends were well.

Lidl similarly saw an “uplift in sales across several product categories, in particular meat and poultry as well as staples like bread, milk and bottled water”.

Increased volumes of products were ordered with sales of milk increasing by 80 per cent on the Tuesday and Wednesday before Storm Emma hit and bread sales climbing by 120 per cent.

As with Aldi, Lidl says it was fully stocked by Monday morning.

Musgraves, which owns Supervalu and Centra, told us it had a “cold-weather plan in place to ensure continuity of business” during the storm. Most outlets closed on the Thursday afternoon and reopened on the Friday afternoon. “We saw spikes in demand for the essentials like milk, fresh meat and fruit and veg, with many of our stores also catering for increased demand for bread through their in-store scratch bakeries,” a spokesman said.

Its supply chain was operational from Saturday morning.

A spokeswoman said demand for bread increased by 100 per cent “and bakeries worked hard delivering three times the standard level to keep up with demand”.

She said that as many as 300 deliveries of fresh produce and storm essentials like batteries, fuel and de-icing materials were distributed via suppliers in the early days of the storm. “Our distribution and store teams as well as suppliers worked around the clock making deliveries into stores when the relevant weather warnings were lifted and our recovery has been good.”

It was all keep calm and carry on at Marks & Spencer where the level of panic buying and stock depletion seen elsewhere was missing. “Our priority during Storm Emma was the safety and wellbeing of our customers and staff,” a spokeswoman said. “We had no need for any additional product orders during this time. All stores were trading normally by midday on Saturday, 3rd March, with the majority of our stores outside of Dublin, Kildare and Meath operating normal trading hours that morning.”