Pricewatch: Our reader offers a ‘salutary tale’ on the vagaries of the driving licence system 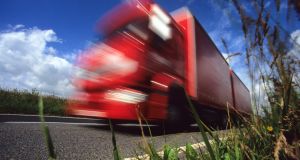 One reader went to great effort to acquire the public services card to renew his truck driving licence, only to discover truck licence renewals are not permitted online. File photograph: Getty Images/iStockphoto

Last week we carried an item from a reader who wished to highlight the fact that if he wished to renew his driving licence using the new-fangled internet thingy he could only do so if he had a public services card.

Our reader did not have such a card, nor did he want one, and he struggled to see why the Road Safety Authority insisted on him having one for it to even consider processing his application online.

His outrage prompted another reader to get in touch with a different but perhaps even more frustrating story.

“Unlike your reader I went to great effort to acquire the public services card to renew my truck [driving] licence, only to discover, when in possession of the card, that they do not permit truck licence renewals online and that I would have to appear in person,” starts the mail from Niall Kierans.

“As my licence was due to now expire shortly I went to my NDLS [National Driver Licence Service] centre on September 30th as a ‘walk in’, happy to wait until called.”

He registered his presence using the machines in the centre and was issued with ticket number 15. The screens above his head told him that he would have to wait approximately 80 minutes to be seen. He wasn’t overly concerned as he had factored a long wait into his day out.

So far so good.

“With time to spare I left to do a few messages and returned 35 minutes later to see that ticket number 25 had now been called,” he says. “Imagine my surprise, or maybe that should be my naivety. When I enquired about what had happened in just over half an hour, the clerk advised that ‘sometimes the queue moves fast’ and that I should re-register.”

So re-register he did, or at least he tried to. “I thought the machine didn’t register my inputs so I pressed the confirmation button a second time and then waited.”

He got another number and waited until he was called, making sure on this occasion not to leave the building.

When his moment came he presented the necessary documents. “The clerk remarked that I was on the system three times that morning and I explained that it should be twice as I had to re-register after leaving to do my messages. I then presumed that the third time may have been when I re-pressed the button.”

He thought no more of it and assumed he was on the road to getting his trucker’s licence renewed.

“I then had my photo taken and had handed over the necessary €55 only for the clerk to then exclaim that she couldn’t process my application as there was an error. I enquired as to what error I had made, to be told that it was not my error but that of the doctor who had conducted the medical exam.”

It seems, she remarked, that the doctor put down a wrong date on the form asserting that Niall was fit to drive a truck.

“She proceeded to show me the error of our doctor’s ways. The year was, in her opinion, likely to be interpreted as being 20101 as opposed to 2019.”

Our reader suggested that it was obvious that – as the form including the date had been completed the previous day – it was likely that it was 2019. He also pointed out that he never heard or seen a yearly date go into five figures.

Niall pointed out that as a result it was “most unlikely that the doctor made the so-called error deliberately. Our diligent clerk in time-honoured fashion subscribing to the Monty Python school of illogic was having none of it; my application was rejected. I was instructed to return to my busy-as-ever doctor, who has much better things to be doing, and advise him to give of his valuable time to dispense with this most officious matter.”

Now our reader accepts that it might be the cynic in him, but he is slightly suspicious that our public servant “was, in an act of pedantry, ‘teaching me a lesson’ for the ‘error of my ways’. The message, I suspect, being that one should not leave the test centre regardless of what messages are on the screen, and most particularly do not have the audacity to press the button twice. A salutary tale for our licence renewers and doctors alike.”

He sent us in a picture of the form, the relevant portion of which you can see here.

There are two years on it – the original one which the doctor scribbled is in blue ink and the amended one is in black ink.

To be fair to the NDLS people, the original year as it was written by Niall’s doctor does look like it reads 20101. But to be fair to him it will be a long, long, long time before that date comes and perhaps an allowance could have been made for that fact and for the universally acknowledged truth that doctors have rubbish handwriting.