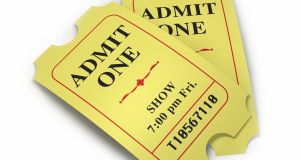 The State’s consumer watchdog has been poring over hundreds of thousands of emails and other electronic documents as part of its investigation into ticket-touting. File photograph: iStockphoto

The State’s consumer watchdog has been poring over hundreds of thousands of emails and other electronic documents as part of its wide-ranging investigation into ticket-touting in the Republic.

The Competition and Consumer Protection Commission (CCPC) began the inquiry into “suspected breaches of competition law in relation to the provision of tickets and the operation of ticketing services for live events” last year.

The move was prompted by concerns over the speed at which tickets for high-profile events were selling out and how such tickets were subsequently reappearing for resale at vastly inflated prices on secondary sites such as the Ticketmaster-owned Seatwave, Viagogo, and other online platforms.

In addition to getting access to huge volumes of information from the companies operating in the ticketing business in the Republic, the CCPC has also held 10 hearings in the investigation, where people involved in the sale or resale of tickets were quizzed under oath.

“To date, the CCPC has gathered 235,000 emails and electronic documents and has held 10 summons hearings where evidence was given under oath,” a spokesman said.

“We are currently conducting an in-depth analysis of all information being gathered. As this is an ongoing investigation, the CCPC is restricted in the information it can provide at this time.”

The focus of the investigation is on potentially anti-competitive conduct by operators in the sector. Among the issues the inquiry is looking at are exclusive arrangements and high service charges.

In the UK, the Competition and Markets Authority (CMA) is continuing its inquiry into the secondary ticketing market.

The CCPC spokesman said the commission was “aware of the CMA’s investigation into potential consumer protection issues in the ticketing sector”.

He said it would continue to monitor the CMA’s progress “through our membership of the Consumer Protection Co-operation Network, which is a network of authorities responsible for enforcing EU consumer protection laws in EU and EEA countries”.