Ireland not affected as Aldi recalls product over rat remains 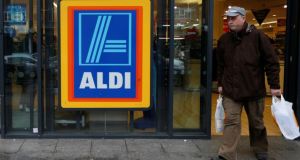 Aldi has voluntarily recalled 38,000 packs of its frozen mixed vegetables after a British grandmother said she found half a rat inside one. File photograph: Suzanne Plunkett/Reuters

Discount retailer Aldi has voluntarily recalled 38,000 packs of its frozen mixed vegetables in the UK after a woman said she found half a rat inside one.

Aldi Ireland was not affected. The product was not on sale in Ireland.

Pat Bateman (60), from Cornwall, said she had just fed her two-year-old granddaughter lunch and was putting the bag back in the freezer when she noticed something “out of place” in the pack.

The retired florist told the Sun: “It was nearly empty so that’s why I spotted something that looked out of place in the bottom of the bag.

“I couldn’t believe my eyes when I pulled it out. It just looked like half a rat. It had fur on it. I showed my husband and because it was frozen we left it to defrost before taking another look at it.”

She added: “We had eaten almost all of the bag before we saw it — and what’s even worse — I fed it to my youngest granddaughter.”

Ms Bateman returned to her local branch and was given £30 (about €34) off her food shop as compensation, but she felt the store was not taking her complaint seriously so she sent pictures to the German retailer’s head office.

Aldi then offered her £500 compensation and reassured her that there was no rat infestation where the vegetables were produced.

But the grandmother, who felt “physically sick” at the discovery, said it was not enough.

A report from Aldi revealed there had been three complaints of “pieces of small rodent being found in one batch of mixed vegetables”, The Sun said.

The packs are supplied by Agrifreeze, a fruit and vegetable wholesaler based in Belgium, and were removed from sale in January.

Aldi said in a statement: “Following Ms Bateman’s complaint, we removed this product from sale to prevent any further issues.

“We have suspended all orders from this production site whilst we investigate this matter.”

The complaint follows a similar discovery in 2016, when a woman claimed she found rat droppings in a plain yoghurt she purchased from Aldi. – PA