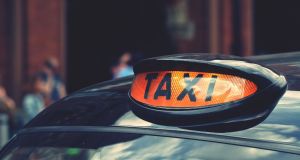 The number of complaints made by customers concerning taxis increased by 5.5 per cent to 1,383 last year. Photograph: iStock

A taxi driver was fined last year by the National Transport Authority (NTA) after a passenger complained of a smell of urine in the vehicle.

The driver was issued with a fixed penalty notice (FPN) by the NTA over the failure to comply with vehicle standards.

New figures show 1,600 fixed penalty notices in total were issued against drivers last year by the NTA resulting in cumulative financial penalties of €76,930 on drivers.The penalties cited on the notices ranged from €40 to €250.

In response to a Freedom of Information request, the authority confirmed that the number of complaints made by customers concerning taxis increased by 5.5 per cent to 1,383 last year.

Overcharging complaints were the most frequent at 529 while complaints over driver conduct numbered 496.Some 78 complains concerned the condition of taxis.

In one case, a customer complained a taxi driver told the passenger not to talk to him as “he had a long night” and “to leave him alone”. In response to the complaint made in December, the NTA issued the driver with a caution.

The authority fined a taxi driver in August after the driver refused to allow a passenger bring a guide dog into the taxi.

In September, a passenger flagged down a taxi and stated that the smell in it was rotten “and he had to travel with the windows open”. The driver “did not welcome any advice about the smell” when the passenger mentioned it. The driver was issued with a caution by the NTA.

In July a passenger complained that a taxi was “dirty and in bad condition. The seats were stained. The floor of the car was badly dented”. The NTA issued the driver with advice.

A passenger described the smell inside another taxi in August as “disgusting” and said they should have got out of the vehicle.

Concerning another complaint in November, a passenger stated that a taxi “smelled of stale cigarettes and alcohol”. The NTA inspected the car and advice was given to the driver.