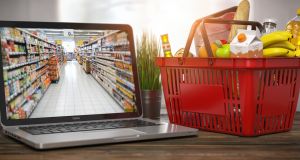 While the EPA continues to warn us on our wastefulness, Bord Bia is suggesting that since Covid, there is a greater awareness and conscientiousness among shoppers about food waste and its impact on the environment. File photograph: iStock

Almost as soon as the pandemic hit early this year, businesses, researchers, governments and individuals all over the world started trying to figure out how the crisis would be likely to shape our world and our lives.

They have also asked how many, if any, of the changes it has brought about – some of them virtually overnight – will endure.

Since the start of the year, people in Ireland have broken off contact with all but their closest networks of friends and family. They have worked from home, holidayed at home and baked at home. They have stopped hugging people or shaking hands – even at funerals – and become a slowed-down and fearful nation who go online to buy their food.

In Ireland, Bord Bia has been to the fore in working out what is happening to consumers – and what might happen next. Last spring it launched a project to see what impact Coronavirus would have on our habits. “We are in the middle of one of the biggest social experiments in our history and it will be fascinating to see how we change as a result of it,” said Rory McDonnell, Bord Bia’s head of strategic planning at the time.

He wasn’t wrong. In that first phase of the research, Bord Bia identified some key food trends. The first was “shielding”, which saw consumers likely to “pay more attention to the science of food functionality [and foods that] boost their immunity”. Another trend Bord Bia spotted was comfort cooking, which saw us all eating the foods of our childhood and baking, a third was safety, and a fourth was labelled “stocking up”.

The research was interesting but unavoidably limited, in that it was carried out in the early weeks of the crisis when there was not a whole lot of data to rely on. We are about 200 days into the crisis now and Bord Bia has kept tracking consumer behaviour in Ireland and in a lot of other markets, including France, Spain and the US.

Some new data is available. As in the first piece of research it has labelled the trends it has spotted, and as before, the first one it lists is “shielding”. It says this has continued to expand since the onset of Covid-19, with consumers turning to supplements and concepts such as food immunity to maintain their health.

“The focus on health has continued to surge and people are taking a significant amounts of supplements, but there have also been changes in the type and amount of food we eat,” Bord Bia’s Grace Binchy says.

She points to the number of people eating foods known to help boost immunity, which has climbed by 5 per cent to 34 per cent over the course of the crisis. However, she adds, it is not just about the food we eat. The proportion of people trying to improve their health more generally is at 44 per cent, up 8 per cent over the last six months.

“Health was already a trend, but what we have seen is that Covid has accelerated certain behaviours,” she says. She points to the growing number of people swimming outdoors – or at least standing by the sea short in dryrobes – and the numbers going for walks.

But could that not be sheer boredom? After all, we have only just come out of the second lockdown of the year and over the course of the six-week stretch to the end of November there was little else for people to do but walk – within 5km of their homes – or go for a quick dip in the sea so you could hang out with your dryrobed friends afterwards.

“Our world did become so small and that is one reason, but there is more to it,” Binchy says.” There has been a focus on obesity for example, as people became aware of the heightened risk of adverse outcomes from Covid-19 among people who are overweight.

While a trend that was identified as stocking-up manifested itself as “panic-buying” in the early stages of Covid-19, this behaviour has now changed and consumers are buying in a more planned and controlled way.

Shoppers are now focusing more on a rolling stockpile as opposed to the more panic-based stocking up seen previously. They are also shopping smarter by focusing on freezer foods and products with longer shelf lives.

According to the Bord Bia research, stockpiling is down 11 per cent to 30 per cent and is manifesting in different ways, with the panic-buying of recent times replaced by “controlled buying as a just in case”.

Binchy then takes a mournful detour for a moment to say the top thing Irish people miss is spending time with friends, with 87 per cent of those polled listing it as the thing they miss the most – the highest number among all countries surveyed.

With one in two people working much more from home now, if not exclusively, it is unsurprising that 40 per cent of people are missing the watercooler chats, while 71 per cent are missing casual dining.

Then she is back to food. Comfort cooking has remained steady throughout the last few months and while it is not growing, there is still a firm focus on familiar favourites. Consumers have also been focusing on better-quality options to make up for the lack of food service and restaurant outlets.

“I think we are maybe trading out some indulgent ingredients for more healthy options, also looking for more quality,” Binchy says. “A lot of people have not been going out at weekends so are rewarding themselves with meal kits and better quality food maybe because they want that nice steak on a Saturday night.”

The number of people having less than healthy snacks and eating outside of meal times has fallen, and people are throwing out less food as they start to focus on waste and waists more.

Personal safety has become an even bigger part of our daily routine, and compliance with mask-wearing, at almost 90 per cent, is much higher in Ireland compared to the US and Europe. That trend has also seen hygiene playing a choice in supermarket selection, and consumers say they will choose supermarkets on the basis of safety regulations, rather than simply cost.

“People have this heightened sense of alert while over half of Irish people are looking to reduce the amount of time they spend shopping,” she says.

“We have seen new methods of delivery emerge and 24 per cent of grocery shopping is now done online, an increase of 7 per cent since May.

“The good news is, that has given rise to this idea of the savvier shopper. When shopping online it is easier to compare prices and to work out how much you have spent, and you put things in and take things out of your basket. It enables a more disciplined and financially rewarding experience.”

While it’s likely that we will have expended our personal bandwidth on “online social”, online social fatigue has set in and getting back to being with our friends is what people really want. The research suggest that Irish people are missing their friends “more than any other country”.

Consumers are also using strategies to make their food go further and cut down on waste – and not before time.

According to a report published last month by the Environmental Protection Agency (EPA), our inability to properly police what is in our fridge is costing us as much as €700 a year while contributing to the climate catastrophe.

The EPA report suggested that more than two-thirds of Irish people say the main reason they throw out food is because it has past its use-by date, while only 10 per cent said they were any good at keeping on top of what they have in their fridge. But the most damning statistic was that Irish households produce over 250,000 tonnes of food waste per year at a cost of €700 per household. Not only is money being wasted, but food that ends up in the bin is a significant contributor to climate change and responsible for about 10 per cent of global greenhouse gas emissions.

So while the EPA continues to warn us on our wastefulness, Bord Bia is suggesting that since Covid, there is a greater awareness and conscientiousness about food waste and its impact on the environment. However, there is a growing tension emerging around packaging, as safety is likely to take precedence for many in making their food choices.

A new indicator identified looks at how society is adapting and working together to provide support during Covid-19. “There has been strong cause to champion those who are the unsung heroes: the train drivers, the delivery drivers, to the retail workers, to the cleaners in the hospital environments. The research highlights consumers’ belief that the continuation of normal life and services is important, with supermarkets and food producers playing a highly valued community role.”

When asked whether Covid-related habits will endure, Binchy says she can’t say for sure but suggests some might. “I think to some degree some of the shielding habits will stick with a certain cohort. The health trend has been on the up for a long time and we are still learning about the benefits of some food and some supplements, like Vitamin D for example.”

She leaves us with a not entirely cheery thought when she points out that it will be a long time before anyone forgets the impact Covid has had, adding that there are well over half a million types of virus lurking on the planet, with treatments available only for a tiny fraction of them. “I really think our relationship with the world and how we interact has changed,” Binchy concludes.

“ We are starting to see the emergence of the more self-sufficient consumer and people are growing more, cooking from scratch more, although they might be baking a bit less than in May.”

She also points out that buying local is more important, with 39 per cent saying they consider shopping locally more relevant than before the crisis.